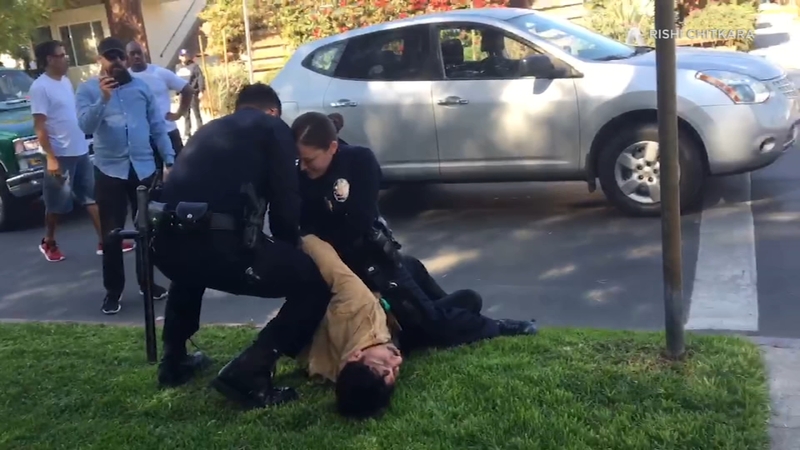 LOS ANGELES (KABC) -- A woman and her daughter were left shaken after a suspect suddenly jumped into their vehicle in the Fairfax District Wednesday afternoon.

Video captures Los Angeles police officers attempting to handcuff a man they later released after witnesses say he jumped into the woman's vehicle, causing her to scream for help.

Moments before police arrived, Rishi Chitkara says he and several others struggled with the man who had entered the woman's vehicle stopped at the intersection of Poinsettia Place and Willoughby Avenue.

"He was forceful and it was very clear he was not supposed to be in that car," Chitkara says. "We pulled open the door, and it was at that time we noticed in the backseat she had a kid."

Chitkara says other good Samaritans held the suspect in the vehicle while the woman freed her child from the car seat. He says the woman was terrified.

Police later arrived and tried to take the suspect into custody.

Others tried to calm the shaken mother and her daughter.

"I hear this kid go, 'We were just going to visit grandma,'" Chitkara says.

LAPD said the victim told officers the suspect entered her vehicle and told her to drive. But police say he was not armed and did not threaten physical violence and had no outstanding warrants.