LAPD looking for at least 5 suspects involved in armed robbery in Fairfax District near Melrose Ave. 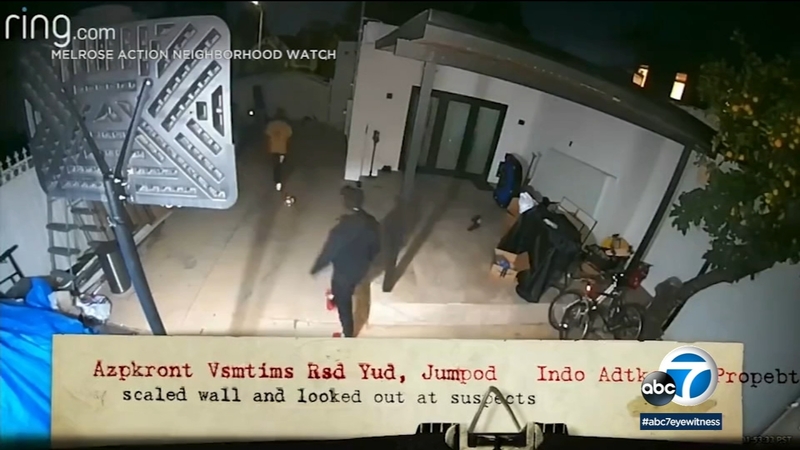 LOS ANGELES (KABC) -- Police are looking for at least five men involved in an armed robbery that left residents in a Fairfax District neighborhood near Melrose Avenue fearing for their safety.

It happened early Saturday morning at a home in the 700 block of Gardner Street, and it was all captured on surveillance video.

Footage shows the men walking up to the home neighbors say is a short-term rental property. Yelling can be heard as the suspects confront the victims staying in the home.

According to Melrose Action - a neighborhood watch group - the suspects demanded valuables during the robbery. The group says the victims hid in other people's yards nearby to stay safe.

Earlier this week, the Los Angeles Police Department issued a safety bulletin for parts of the city that have experienced an increase in crime, such as Melrose Avenue, the Jewelry District, nightclubs and high-end restaurants.

LAPD says investigators have identified 110 crimes that fall under this category.

"This being in the neighborhood was something totally unexpected and out of the ordinary," said Peter Nichols with Melrose Action. "I've got to say, all day and all night, I've been repeating the same thing: the entire incident was just something like straight out of a movie. It was just so odd."

A trend of violent crime was perhaps never as high-profile this year as it was in September, with gunpoint robberies targeting customers and businesses along Melrose. The statistics have fluctuated since then with more officers patrolling the area.

The volatility has not totally eased, as proven on Saturday Nov. 6, when the LAPD says a man tried stealing from someone along a Melrose sidewalk. The victim, according to police, tried grabbing the gun. No one was hurt, but the LAPD says it was the wrong move.

"Cooperate with that person," said Chief Michael Moore. "There's nothing on your person that's worth your life."

LAPD also wants people, in general, to be aware of their surroundings, think twice about showing valuable jewelry and pay attention to any cars that may be following you - near Melrose or otherwise.

Authorities issued the safety bulletin in response to a trend in robberies in which people are being followed home or to their business.

We are sharing this community alert in an effort to increase awareness of a series of robberies occurring in the City of Los Angeles. pic.twitter.com/mE5vVfCZZo