Man killed, girl injured after car crashes into Tustin home, only feet away from group of sleeping teens 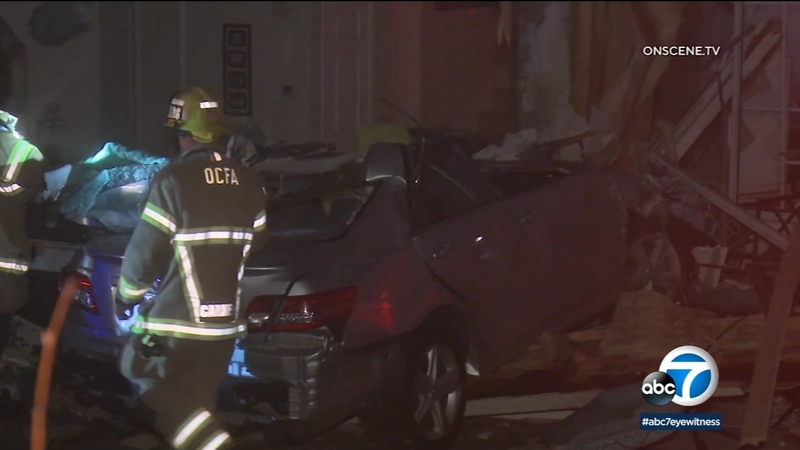 TUSTIN, Calif. (KABC) -- A man was killed and his 17-year-old female passenger was injured Saturday when the 20-year-old driver slammed his vehicle into a home in Tustin, nearly striking a group of teen girls who were sleeping in the living room.

Tito Perez and his family woke up to a car in their dining room early Saturday morning. Chandeliers, TVs and anything in the vehicle's path turned into projectiles.

"It felt like a magnitude-20 earthquake. It shook the whole house, everything fell from the wall," he said.

The crash happened just before 2:30 a.m., all while his two teenage daughters and their three friends were sleeping in the living room. The girls, who were celebrating a 17th birthday with a sleepover, suffered minor scratches.

"We just heard a ton of screaming from downstairs. We came running, the girls were all obviously in shock," Perez said.

The driver of a Toyota Camry was traveling eastbound on San Juan Street at a high rate of speed. The car went through the intersection at Browning Avenue, crashed through a cinder block wall and then into the house in the 13000 block of Iroquois, according to Tustin police.

Responding officers found a man - identified as Isaac Hernandez Lazaro, of Tustin - and teen inside the vehicle. He was pronounced dead at the scene, police said. He was not wearing a seatbelt, according to authorities.

The girl, who suffered minor injuries, was taken to a hospital for treatment. She was wearing a seatbelt, police said.

Detectives were investigating whether drugs and/or alcohol may have played a role in the accident.

"When you look at it, you just estimate anywhere from 80 to 100 (mph) just on the damage," Tustin Sgt. Luis Garcia said. "We're looking into cameras down the street to see if we can maybe follow and backtrack them and see where they came from initially."

Though the Perez family has been displaced, they say they're grateful to be alive.

"It could be anybody's last day. We live one day at a time and we thank God for every single day, every single minute," Perez said.