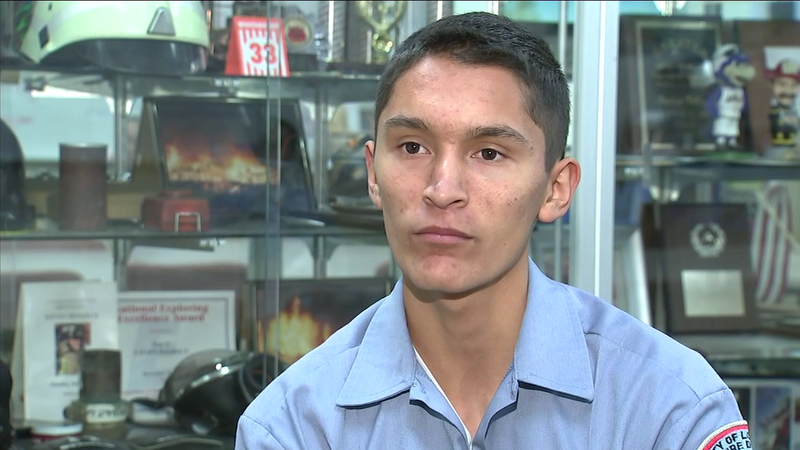 LANCASTER, Calif. (KABC) -- While some teens may spend their free time hanging out with friends, or playing video games, one teen in the Antelope Valley is taking a very different approach.

Nava, who is a junior at Quartz Hill High School in Lancaster, wants to be a firefighter someday.

"This program is helping me see the steps into becoming a firefighter and it helps the community. So it's something I definitely wanted to do," he said. .

But the best part is that he gets to see what firefighters do on a daily basis.

Nava said, "You're actually able to go out on calls with them. It is good training, it's good hands on, and and they treat you as an adult, which I really like."

Every year during the holidays, Felipe and his sister, who is also an Explorer, do something to give back. They normally cook and serve food to those in need, but this year, Felipe says they wanted to do more.

So, he said they organized a winter drive -- collecting jackets, blankets, and socks; anything to help people stay warm.

"Felipe presented this project last week and said he wanted to do a drive for sweaters and we have some of the harshest winters up here in the high desert. And he just took the initiative and we backed him up, giving him anything he needed," DeFrancesca said.

His supervisors at Fire Station 33 in Lancaster say 16-year-old Felipe is always enthusiastic and willing to learn, and has an outstanding work ethic.

"He's a part of our future and that's what we strive for," De Francesca said.

Felipe says he's eager to soak up all the knowledge that will one day lead him to a career as a firefighter.

And he's happy he's found a way to give back through the clothing drive. He said, "It's a way to show that I'm grateful for what I have and to help others."

So far, he and his sister have collected quite a few items, and they hope to start distributing the warm clothes by mid-December.