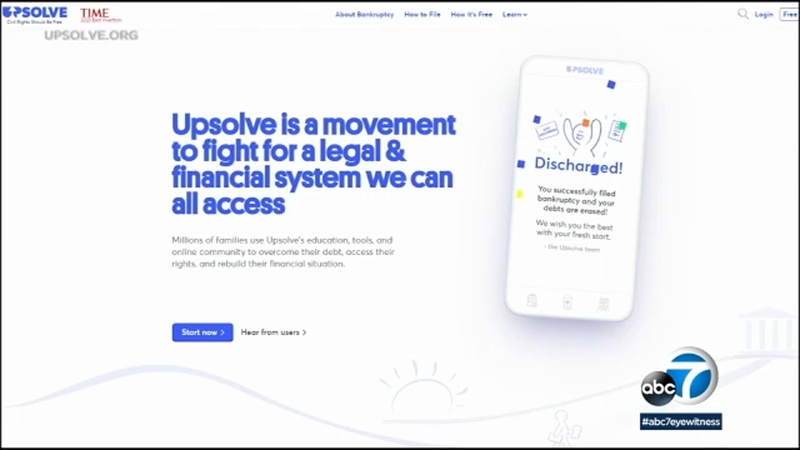 Nonprofit offers free bankruptcy filing for those with extreme debt

LOS ANGELES (KABC) -- Like many, Jorge Balam's divorce set him back financially, but at least the Southgate resident still had a steady job in IT. Then, the pandemic hit and Balam was furloughed, falling $70,000 into the hole. Balam tried to declare personal bankruptcy, but it was harder than he anticipated.

"Even to be broke, you still need money...The first call, the first meeting was free. And then they quoted me and I'm like, really? So on top of what I owe, I'm going pay you another 15 grand, 20 grand? How is that possible? They're just after your money. They don't even know what you're going through and they're already asking for a retainer, they're asking for these packages, and they even recommend a loan company if you can't pay it," Balam said.

Balam found himself couch surfing and says he felt ostracized by friends and family.

"I had a fall a year ago and I had to have caregivers at first around the clock and then daily from an agency. They cost me $4,000 a month and my income pension was about half of that, so I exhausted all my resources. I used all my credit cards," Kearse said.

Unable to afford the legal fees of a bankruptcy attorney, both desperately searched the internet and came across the nonprofit Upsolve, a free service that allows low-income Americans to file for Chapter 7 bankruptcy on their own.

"There is this cruel irony in America that it costs $1,500 on average in legal fees in order to file for bankruptcy. So what we've set out to do is make that process free for low-income families who can't afford legal fees, which are in many cases like modern day poll taxes. When you can't pay the fee, you can't access your rights," said Rohan Pavuluri, the CEO and co-founder of Upsolve.

Experts believe personal bankruptcy filings could rise in California with a majority of the financial assistance during the pandemic ending, like unemployment benefits and the eviction moratorium.

According to a projection from the Justice Department, personal and company bankruptcy filings will double in 2022 compared to what they are in 2021.

"Bankruptcy is part of the American DNA. It's to give people a second chance after they've faced these hard times," Pavuluri said.

Although Kearse and Balam weren't turned off by the stigma surrounding bankruptcy, so many people are - and they could end up homeless or in dire financial trouble because of how the system is set up.

Anchored off the Southern California coast, many people see a record-setting backlog of container ships. But others, like Amanda Gattenby of Crate Modular, see opportunity.