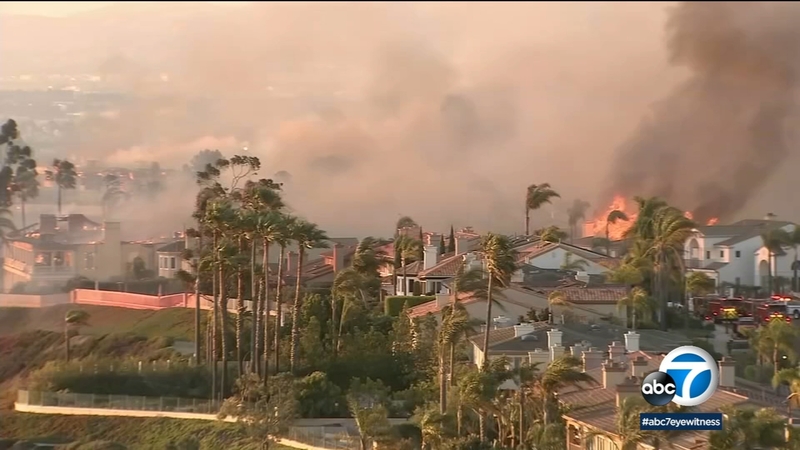 And after a devastating fire destroyed more than 20 homes in Laguna Niguel in relatively cool weather and no Santa Ana wind event, some firefighters say it's further evidence of the dangerous situation that exists because of the severe drought.

"Everything is primed and ready to go," said Calfire Capt. Neil Czapinski about the brush and chaparral in Southern California. "It's very cyclical; the brush grows back really quick. It's how it's designed."

Czapinski said in some places it's so dry, it doesn't necessarily need to be a Santa Ana event for the wind to affect fires in an adverse way.

"Once (a fire) is established, and even if it's just topography influenced, obviously if something starts at the bottom of the hill, it's going want to radiate, and the fire burns uphill."

Evacuation orders remained in place Friday for some 900 homes in a Laguna Niguel neighborhood that was burned by a 200-acre fire, and firefighters were on the scene dousing hotspots and extending the containment line.

But it's not just the weather that's causing problems for firefighters this year.

Cal Fire is dealing with a shortage of inmate hand crews, in large part because of the COVID-19 pandemic as well as prison realignment. Czapinski said they're trying to hire more full-time hand crews to supplement the loss, but it takes at least three weeks to train them before they're ready for the fire lines.

"We had to come up with other ways to be able fight fire as we have in the past. With COVID-19 stopping that process of getting more inmates through the system, as well as them being let out (of prison), we got the approval to hire permanent firefighter hand crews."