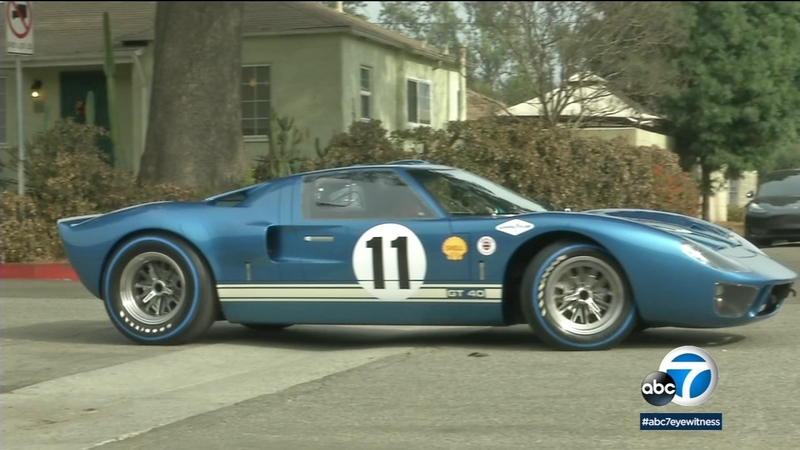 The marquee stars of "Ford v Ferrari" are Oscar-winning actors Matt Damon and Christian Bale. But the other star of the film is the car that Carroll Shelby and Ford developed to go after Ferrari, the GT40. Even though the smallest details were sweated in the making of the period film, the producers couldn't use the actual cars that raced back in the '60s. Some do survive today, but they're extremely valuable.

They are exact in every way, and the Irvine-based company has been selling them for years, allowing enthusiasts to relive the glory days of the car that challenged Ferrari on the track. The custom-built cars will set you back anywhere from about $165,000 to $250,000, ready to drive. (The customer decides what kind of engine the car will get, and that's where the cost can really vary.) That's about what you'd spend on a new Ferrari or other new exotic car.

And the GT40s did a top-notch performance on screen, taking the audience back to 1966. The cars are very accurate, down to the last detail, just the way they were in the 1960s. And some of the parts on this car make little cameos in the film: the wheels, the engine, and the tachometer were highlighted to show the development and racing action of the cars back in the day.

Superformance is doing a special batch of cars exactly as seen in the film. Want to drive a new Cobra like Damon did playing Carroll Shelby? They'll do it, and GT40s done up like the cars that raced in the movie. The limited-edition cars are called the Cinema Series.

"You can put a movie star in your garage if you want. You can have an exact duplicate of the movie cars for your own," said Doug Campbell of Superformance.

Car enthusiast Bob Lee of Woodland Hills owns a spectacular example of a new Ford GT40 that he took delivery of in April. His car is not exactly like the movie cars, but was built the way he wanted it. And he expects it to be noticed even more now, with "Ford v Ferrari" opening in theaters and expected to attract a wide-ranging audience.

"Everyone will know now what a GT40 is. They'll be thinking 'Wow, is that one of the ones in the movie?'," said Lee while sitting behind the wheel of his low-slung ride.