KABC
By Jovana Lara, Marc Cota-Robles and ABC7.com staff
CALABASAS, Calif. (KABC) -- Calabasas High School said it learned that a former football player is among the two people gunned down in a mass shooting at a video gaming tournament in Florida on Sunday.

The school tweeted Clayton's picture and said "Our hearts are broken as we learned that former Calabasas Football player @True__818 (Elijah Clayton) was senselessly murdered today during the mass shooting in Florida. We send our love, condolences, and deepest sense of sorrow to Elijah's Family and Friends."

The principal at Calabasas High School said her staff has been deeply affected by the shooting in Jacksonville.

"He was amazingly kind hearted," Foss said. "He was a contributing member of our campus."

The Woodland Hills native attended the high school as a senior from 2013 to 2014. News of his death shocked the campus.

"When it hits this close to home, it's going to be especially difficult," Foss said.

Clayton's family - his nine siblings and large extended family - are heartbroken by the senseless tragedy.

"My cousin has to bury her first born and it is just as terrible as that sounds. Our family has been forever changed. Nothing will replace the love that we have for Elijah. There is a hole that will never be filled," Clayton's cousin, Brandi Pettijohn, said.

Known in the gaming world as "Trueboy," Clayton was "consistently one of the best in competitive Madden," according to the EA sports website.

His family said he made good money through competitive gaming and saved his earnings to pay for college.

Clayton was seen in a livestream video of the "Madden NFL 19" tournament on Sunday - a mere second before the gunfire broke out.

The shooting took place at a sanctioned "Madden NFL 19" competition, according to video game company Electronic Arts, which produces the Madden franchise.

First responders were called to the scene at GLHF Game Bar in Jacksonville Landing, an outdoor mall complex on the St. Johns River, at 1:34 p.m. local time, and officers arrived on the scene within two minutes.

The Jacksonville Sherriff's Department also identified the other victim as Taylor Robertson, a 28-year-old from West Virginia.

"He was a dedicated student doing his best in the classroom while being a great teammate to his football family," the school's principal said in a statement.

Mona Thomas said her older son attended Chaminade with Clayton and they could not believe he'd been killed.

"His mother was an amazing woman who was incredibly close to her son, and my heart breaks for her this morning and for the entire family," Foss said. 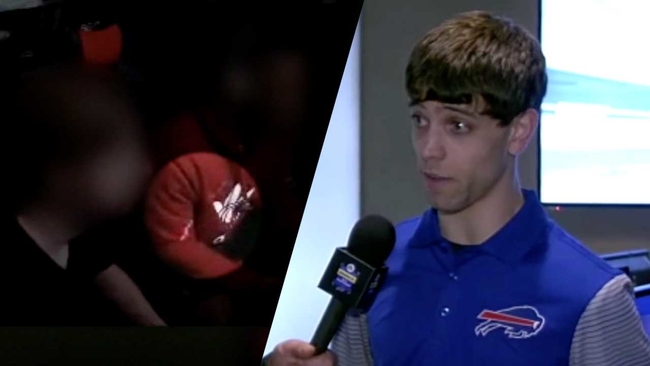