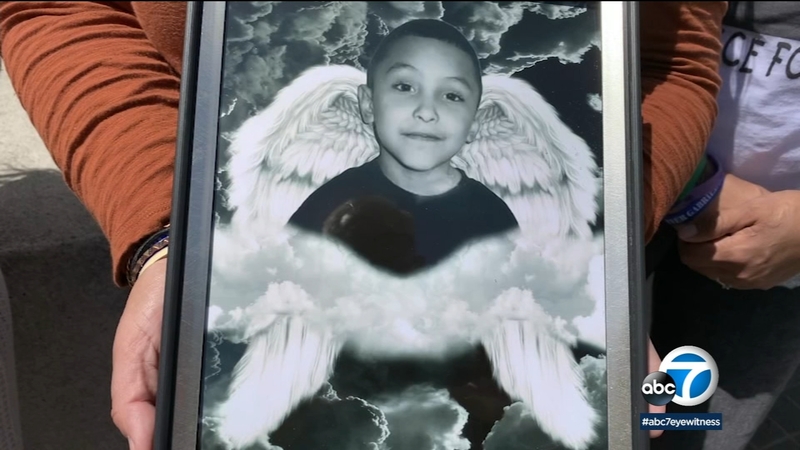 LOS ANGELES (KABC) -- The family of 8-year-old Gabriel Fernandez has been trying to create a mural to remember the murdered Palmdale boy and other abused children.

Gabriel's story shocked and saddened people around the world. He suffered months of torture and abuse by his own mother and her boyfriend before he died in May of 2013. Last week would have been his 17th birthday.

"It's just an emotional time for me. It sets me back to memories of the time when he was alive," said Olivia Rubio, Gabriel's aunt.

For years, Gabriel's family and others have been trying to get a mural to remember him and other abused children. An image of Gabriel with wings like an angel is one they would like to use for the mural.

Deputy District Attorney Jon Hatami prosecuted the case, and is still very close to the family. He is a strong advocate for children.

RELATED: Palmdale community remembers Gabriel Fernandez on what would have been his 17th birthday
EMBED More News Videos

Family and friends gathered to remember Gabriel Fernandez on what would have been his 17th birthday. He died in 2013 after years of being abused and starved.

The family has been trying to raise funds to get a mural. The Los Angeles Rams know Gabriel's story and they donated a collectible helmet signed by Super Bowl champion quarterback Matthew Stafford.

Eyewitness News presented the helmet to Gabriel's family so it can be auctioned off to raise money for the mural.

"For the Rams to do this and the quarterback - this is absolutely touching," said Emily Carranza, Gabriel's cousin.

The Rams sent Eyewitness News a statement, which says:

"When ABC7 reached out to us about getting an old, Rams helmet signed to help raise money for Gabriel's mural, we knew we had to act, which is why we donated a brand new, signed Matthew Stafford helmet on top of the one they already had for the raffle. No matter how much money the helmet brings in, we're honored to even play just a small part in helping to get a mural constructed in Gabriel's honor so that his memory can live on forever."

"We are touched by this and we love anybody that loves Gabriel Fernandez," Rubio said.

The family hopes the image of Gabriel with wings like an angel will be a reminder that despite the warning signs of abuse, the Department of Children and Family Services made some very big mistakes.

So far, however, it's been difficult finding a location.

"We haven't had any good feedback, so we are reaching out to anyone in the community or anyone in Los Angeles, San Fernando Valley - if you know anybody that has a beautiful wall, that is perfect for our sweet little angel Gabriel Fernandez," Rubio said.

The family says it would be a place where others can come to remember any child who is the victim of abuse.