VIDEO: Veteran struck by driver in Gardena after altercation over littering 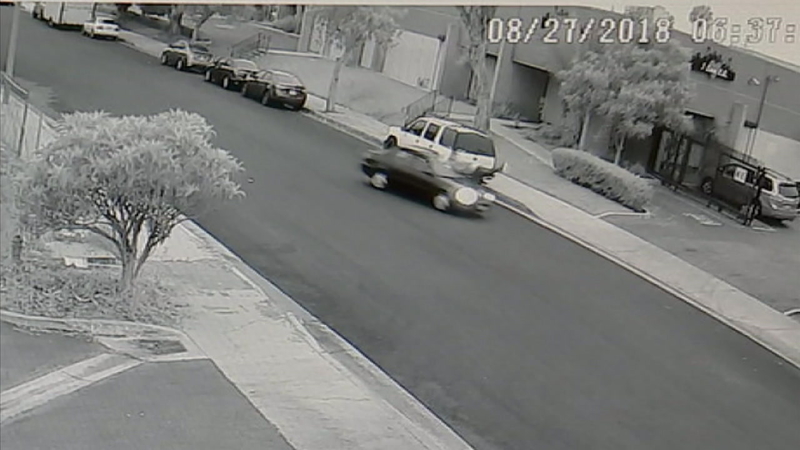 GARDENA, Calif. (KABC) -- Disturbing surveillance video shows a hit-and-run suspect strike a veteran in Gardena, and police are on the hunt for the driver.

In the video, Josh Byrd is in the middle of the street when a vehicle traveling at about 30 mph appears to slam into him intentionally.

It all happened Monday morning, when Byrd was walking his service dog outside his job.

Byrd said prior to getting hit, he saw the man parked outside the warehouse -- his belongings piled inside his car. The man started throwing garbage outside of the vehicle when Byrd asked him to stop and put the garbage on the hood of the car.

"I kindly asked the gentlemen, 'Sir, would you mind picking up the trash that you threw?' No response. He can't see me, I can't see him cause he has trash bags blocking his windows," Byrd explained.

The man started yelling profanity, threw a glass container of urine and Byrd attempted to throw it back, as seen in the video. That's when the man turned around and slammed into Byrd.

The Iraq War veteran received cuts and bruises all over his body. He got a fractured wrist and five stitches in his chin.

"Any other type of person would have been like, 'All right.' They would have cursed me out, threw the trash at me or whatever and just drove off and continued on with their day. Now, the Gardena police are looking for him for attempted vehicular manslaughter, which carries, 20 to 25 years in jail. This guy is facing a lot of time," Byrd said. "All this guy had to do was pick his trash up."