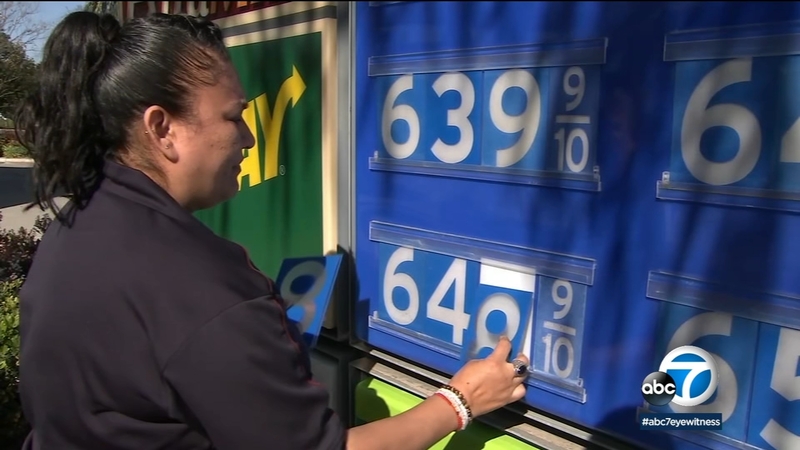 ORANGE, Calif. (KABC) -- Relief from soaring gas prices may be on the way for California taxpayers.

Gov. Gavin Newsom made the announcement Tuesday during his State of the State address. He proposed a tax rebate amid record-high prices at the pump.

"Working with legislative leadership, I'll be submitting a proposal to put money back in the pockets of Californians to address rising gas prices," Newsom said.

"I think Republicans have been very clear that we are asking for a 'gas tax holiday.' Families want to feel that immediate reprieve at the pump," Martinez Valladares said, adding, "We all know that the gas tax in California is regressive. It affects, I think, communities of color most. It affects working-class families most."

Proposals for a "gas tax holiday" to counter inflation had been moving slowly in Congress and state capitols before Russia invaded Ukraine, but they have gained momentum this week amid surging prices.

In an email Wednesday, a spokesperson with the governor's office told Eyewitness News more details of the proposal are coming in the near future, and only confirmed it would be a "tax rebate" and provide "billions in relief."

The war in Ukraine may be playing a factor in Southern California's skyrocketing gas prices, which jumped overnight in L.A. County. But some relief may be on the way.

Below is the entire statement emailed to Eyewitness News:

"The administration is developing a proposal that puts money directly in the pockets of Californians. It will take the form of a tax rebate and we look forward with the legislature to implement it. The Governor is focused on providing billions in relief to Californians who are suffering from rising gas prices across the country due to the ongoing situation in Russia."

One thing Newsom made clear Tuesday - he's steering California away from dependency on fossil fuels.

"At a time when we've been heating and burning up, one thing we cannot do is repeat the mistakes of the past by embracing polluters drilling even more oil, which only leads to even more extreme weather, more extreme drought and more wildfire," Newsom said.

"In California, we have really led the way in terms of innovation and climate goals and what we need to focus on though now is energy independence and you know, we can do both," Martinez Valladares said.

Back in January, Newsom proposed a pause to the gas tax increase as part of the proposed budget. The gas tax relief measure was expected to kick in in July, but legislature approval was still pending Wednesday and the Russian invasion of Ukraine has increased pressure.

The national average price for a gallon of gasoline reached an all-time high Monday morning as gas prices continue to increase in Southern California.

Lee Dottavio told Eyewitness New that last year he filled up the tank of his truck every four days with about $80. On Wednesday, it cost him about a $130.

"Anything that they can do would help more than anything. If we can get it back down to at least $4 a gallon, where it's affordable for everybody," Dottavio said.