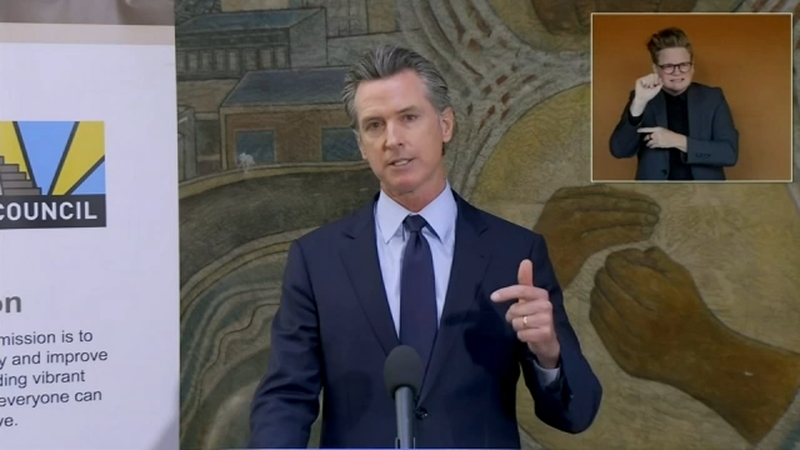 Part of Newsom's California Comeback Plan is expanding the state's Golden State Stimulus relief package to include families who earn up to $75,000.

The governor said the state would spend $12 billion to send out the $600 payments, which two out of every three Californians would be eligible to receive.

RELATED: Where is my Golden State Stimulus check? Find out if you're eligible here
EMBED More News Videos

The Golden State Stimulus is another one-time payment for Californians. You could receive $600 or $1,200.

The $100 billion California Comeback Plan would be funded by using California's $75.7 billion operating budget surplus, and the remaining $26 billion will come from the federal government.

The plan to use the budget surplus would need to be approved by the State Legislature.

The state had predicted a $54.3 billion shortfall last year.

The state will also use billions of dollars to cover back rent accumulated since last April for Californians in need. Newsom said the economic relief package would double the state's rental assistance, allocating $5.2 billion to take care of missed rent payments.

The plan will also cover $2 billion in relief to help people pay off past due utility bills, including water and gas. Newsom said $1 billion of that allotment is expected to be set aside to address state's water crisis.

The governor said more of the state's comeback plan would be revealed throughout the week, including funding for schools to bring all students back by next fall.

"Everybody should be back in the fall and in-person instruction safely in fact, our budget will reflect even more support than the previous support that has been provided for health and safety," Newsom said.

Economists forecast that California will recover from the pandemic faster than the U.S. and showcase the resiliency of the Golden State's robust economy.

Gov. Newsom said he was aware of the decline in the number of people seeking the COVID vaccine and urged people to get their shots, saying California's economic recovery was, "Predicated on ending the pandemic."

California's positivity rate reached the lowest it's been since the pandemic began, with the seven-day rate at 1%.

62% of Californians have received their first dose, which Newsom said was an encouraging percentage.

Some California doctors have said that the state could reach herd immunity; however, there is still disparity among counties up and down the state. In Central California, vaccine demand has declined significantly, and local health officials voiced their concerns last week of a potential surge in the summer.

Newsom's address comes after the race for Republican candidates looking to challenge the Democratic Governor in an all but certain recall election kicked off last week. San Diego businessman John Cox kicked off his campaign, featuring a live 1,000 pound bear. Meanwhile, former Olympic decathlete and reality TV personality, Caitlyn Jenner released her first political ad in her bid for governor.

"Just giving money out on a one-time shot, it's going to help a little bit. But you know what? Let's get people jobs. Let's open up small businesses again. Let's get these restaurants open," he said.

Newsom didn't give a clear answer when asked if the recovery package was part of his campaign strategy.