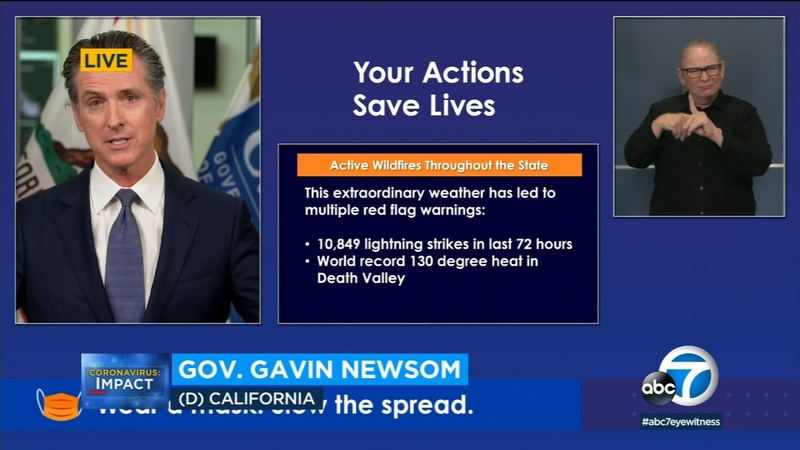 The heat has placed extra stress on California's power grid, and led to rolling blackouts Friday and Saturday. The governor said Wednesday night looked like the "last challenging night" of the week. Wednesday's Flex Alert will take effect an hour earlier in hopes of avoiding rolling blackouts, with Californians urged to conserve energy between 2 p.m. and 9 p.m. to avoid major blackouts.

In his press conference Monday, Newsom admitted the state wasn't adequately prepared to deal with the record heat wave, and the resulting rolling blackouts.

"Let me just make this crystal clear: We failed to predict and plan for these shortages and that is unacceptable," the governor said at the time.

Since Friday, the governor said the state has taken the following actions to reduce energy usage:

"Even with all of that, we are likely to fall short," Newsom said. "I am not pleased with what's happened. I take a backseat to no one."

The Hennessey Fire has devastated the English Hills community in Vacaville, burning dozens of homes as evacuation orders were expanded in Solano County.

He said there were 367 known fires burning in the state, and 23 major wildfire complexes. While the conditions are challenging, Newsom said the state had prepared early by hiring hundreds of seasonal firefighters and hand crews.

The governor also announced Placer County in Northern California was removed from the COVID-19 watch list, after San Diego was taken off Tuesday. Newsom added that San Francisco will likely come off the list on Thursday.