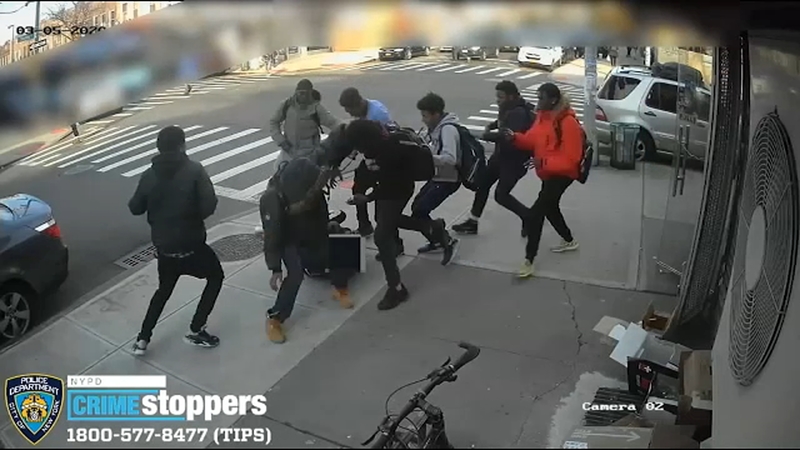 More arrests in gang attack of teen girl in Brooklyn

CROWN HEIGHTS, Brooklyn -- Warning- This video may be disturbing to some viewers.

Police arrested seven teenagers in connection with a gang assault and robbery captured on camera in Brooklyn.

Investigators charged six boys and one girl with gang assault.

A rally was held over the weekend, condemning the brutal assault of a 15-year-old girl, with the victim's grandmother and local activists decrying the attack.

Video shows a group of teenage boys pounce on a 15-year-old girl.

"My granddaughter, her spirits are broke, mine is broke," Pamela, the victim's grandmother, said at the rally in Crown Heights. "All I think about is the boy, Lesandro Guzman Feliz, 15, who got killed in the Bronx, and I thought, please don't let nothing happen to my baby."

The NYPD says that the boys, ranging in age from 14 to 17 years old, turned themselves in at the 77th Precinct. Their fates will be decided in Family Court.

The shocking incident happened Thursday at 4:10 p.m. on Utica Avenue in Crown Heights.

Disturbing video shows a group of teenage boys pounce on the girl. They punched and kicked her over and over until she was unconscious.

The video also showed one of the boys stealing her Air Jordan sneakers, phone and wallet.

Tony Herbert, a community advocate, has spoken with the mother of one of the teenagers who is charged. He said the boy's mother is apologizing to the victim's family and says she is also willing to purchase new Air Jordans for the girl.