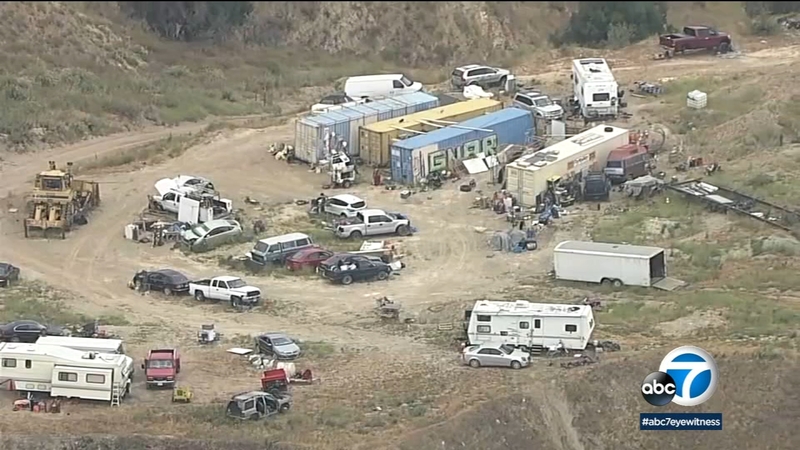 GRANADA HILLS, Calif. (KABC) -- Residents of a Granada Hills neighborhood are growing frustrated as they witness a growing number of squatters move into a vacant lot.

It's a situation that other communities across the Southland have experienced amid the homeless crisis.

There are broken-down vehicles, shipping containers, campers and trash at the Granada Hills site.

"These people are criminals up there," said Allen, who lives in the area. He declined to give his last name. "They are coming down and stealing things from our residents."

Another resident, Alleta Ojeda, said, "My concern is the waste, the waste that's coming off of there. Where is the waste going?"

The encampment is above a residential neighborhood. Homeowners say it's been there for more than a year and has made the area unsafe.

A shocking video showing local firefighters punching and kicking a person at an LAFD fire station is going viral. LAPD says that person was trying to break into the fire station.

"Is it going to expand? Are more people going to come? Because the city is not doing anything," resident Chan Mahajan said.

ABC7 did not see anyone at the site on Friday.

Residents say they contacted Councilman John Lee's office a year ago but nothing changed. Some are worried about the potential fire danger.

In 2019, the Saddle Ridge fire burned through just a short distance from the encampment.

On Friday, ABC7 attempted to contacted Lee for comment. In response, the councilman's office issued a statement:

"Councilmember Lee takes community safety extremely seriously. The Department of Building and Safety has already conducted an inspection of this private property per the request of our office. We will work with the Department to obtain compliance if violations are identified and we encourage the community to contact our office for updates."

"We got everybody's attention, so hopefully now they'll do something about it," said Allen. "We just want it fixed."

Lee's office told ABC7 on Friday that that the owners of the property were cited by the Department of Building and Safety for unapproved use of land. It has to be cleaned up and they have been given 30 days to comply.