As a splinter group of protesters in Berkeley started vandalizing stores, some demonstrators stepped in to try to prevent looting and damage to the city.

The protest started peacefully Saturday but turned violent and lasted well into the morning hours.

But the demonstration wasn't all violent; some protesters stepped in to try to prevent looting and damage to the city.

Video from Sky7 HD showed the moment when police used smoke bombs and tear gas to disperse the protesters. It worked to break up the large crowd. But at times, demonstrators threw the canisters back at the officers. Police say a small group of protesters also hurled bricks, pipes, smoke grenades and other items at officers.

The demonstration started going sideways when the large group made its way to Berkeley police headquarters and officers tried to keep the clear of the building. One officer was injured by a flying object tossed from within the crowd. Some people tried to keep the protests non-violent.

"No violence, no violence," shouted some demonstrators.

Police deployed a smoke canister to disperse the crowd. And that's when the protesters splintered. One group made their way to the nearby Trader Joe's and started bashing in windows. Protesters then hit a neighborhood RadioShack.

"We're just at work and the next thing you know, that window breaks, that window started breaking, these two windows break," said employee Marcus Auzenne.

"Kid with a hammer comes in, throws brake fluid like he was going to light the store on fire," said employee Joseph Reindl. "Guy with a crowbar comes in and starts stealing stuff."

They say one looter went after a customer in the store and as they rushed him out the back door, another looter attacked with a skateboard.

"And I don't know why they have white people coming in and shoving black people, you know what I mean?" Reindl said. "If you're protesting white on black crime, like, you shouldn't even be in this protest if you have white skin."

Outside, neighbors helped sweep up the shattered glass.

"We heard people shouting and then smashing shops so we just come here to help them clean," said a neighbor named Jampa.

As the night unraveled, some demonstrators did try to stop the looting and vandalism.

"Why are people looting?" asked neighbor Jubilee Dominguez. "There's no need. We're peacefully protesting. We shouldn't be taking things from stores that aren't bothering us."

After a few hours, one small group finally made its way back to the UC Berkeley campus. And that's when police made several arrests

Several businesses -- including a Trader Joe's, RadioShack, and Wells Fargo -- quickly tried to repair a lot of the damage. Several police vehicles were also vandalized during the protests.

About a dozen protesters were also arrested in San Francisco, where demonstrators shut down traffic at Market Street near the Powell BART Station for about an hour. Officers eventually moved in and took several people into custody. 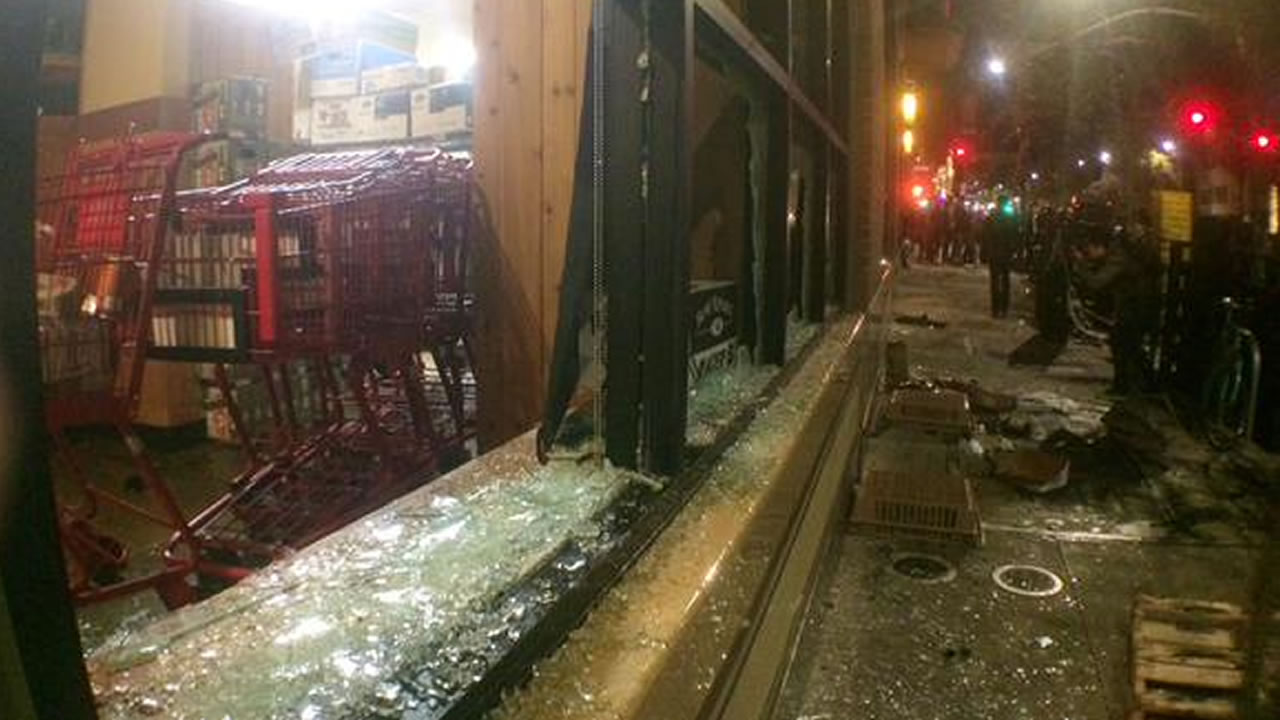 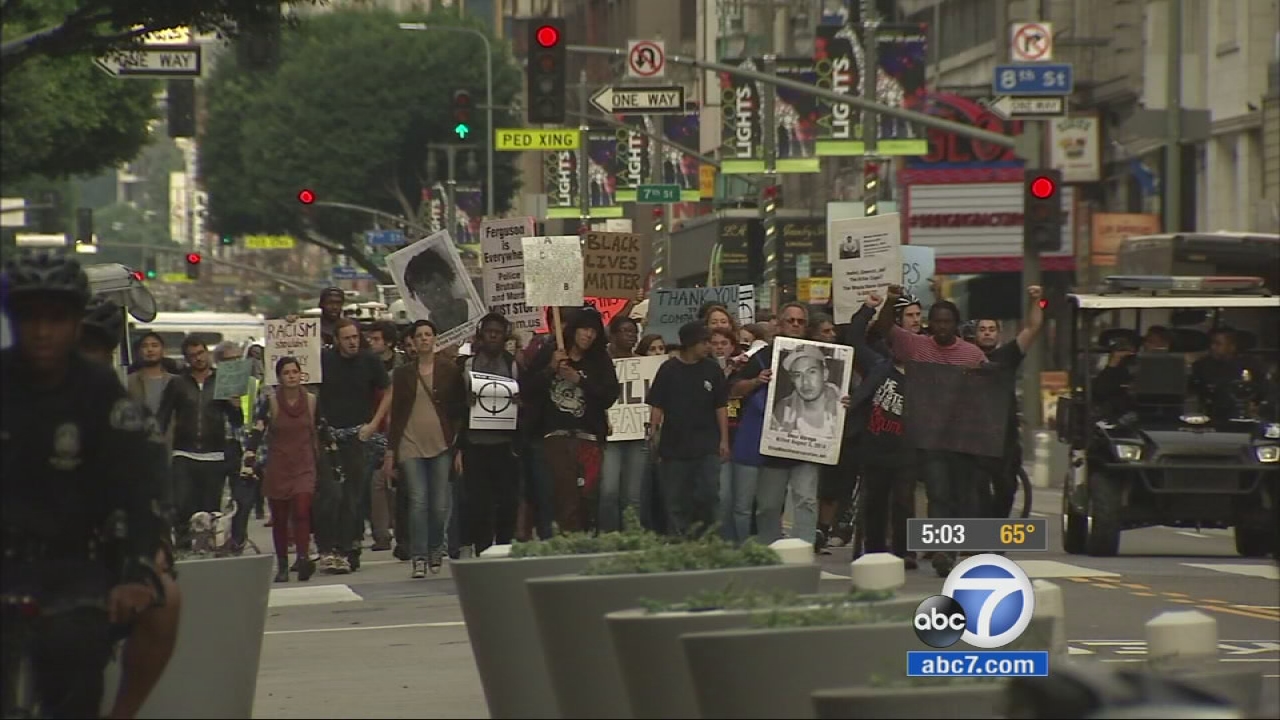 Protesters continue to speak out against excessive force 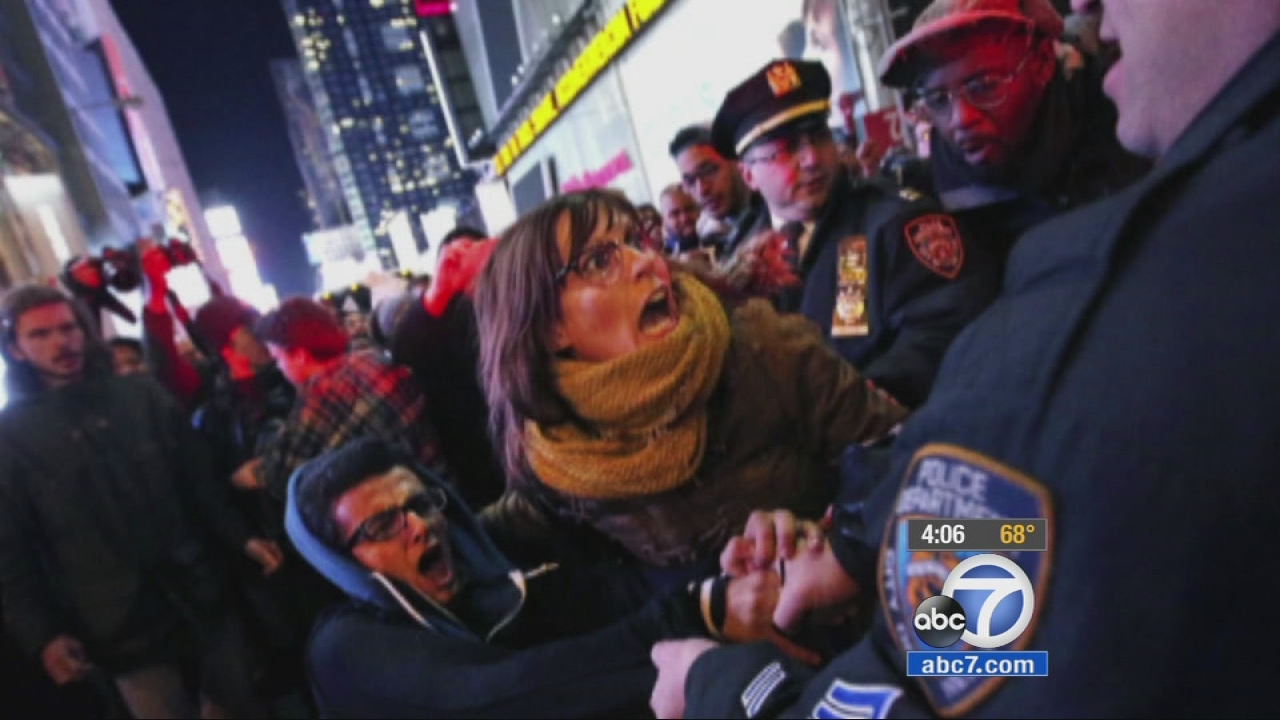