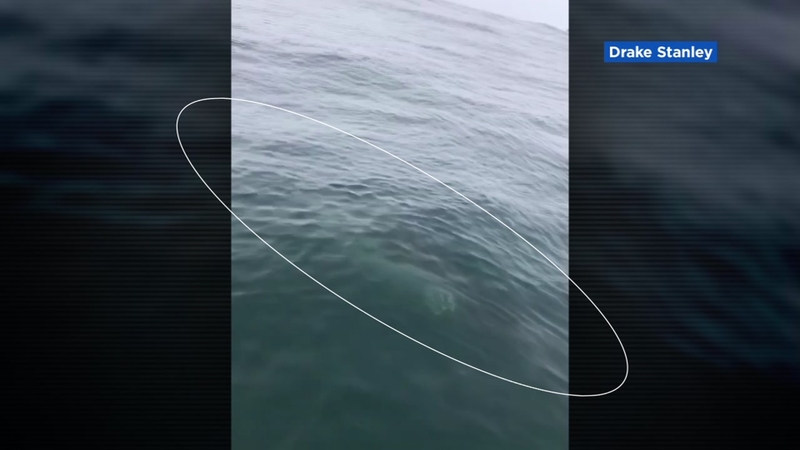 HALF MOON BAY, Calif. -- Mavericks surfers got a major dose of adrenaline Sunday, but for once it had nothing to do with surfing huge waves.

Instead it came from a close encounter with a humongous great white shark, estimated to be 18 to 20 feet long, that cruised within inches of one jet ski and forced the evacuation of the entire surf break.

"This was by far the biggest and scariest creature I've ever seen in the ocean."

And Drake Stanley would know.

A big wave surfer and professional surf rescuer, Stanley has been the ocean his entire life, diving and spear-fishing.

But he said what he saw Sunday was like nothing he had ever seen before.

It started as just another day out at Mavericks.

Stanley said he had surfed in the morning and was working as a jet ski rescuer for other surfers in the afternoon.

He said he was sitting on his jet ski with the engine turned off around 1:30 p.m. by an area known as Mushroom Rock when he first saw the huge shark.

"It looked like a whale," explained Stanley as he watched it rise out of the green depths of the ocean.

Stanley said the shark swam just inches under his jet ski, close enough for him to see the scratch marks on its skin and its dark gray eye.

"I could have reached out and touched it," Stanley recalled.

He estimated the shark to be about 16 to 20 feet long since it was much longer than his jet ski and rescue board.

It was so big, that it didn't even fit into the frame for the one picture he was able to take of it.

But the frightening encounter got scarier when Stanley said the shark spotted a surfer paddling in from the Mavericks break.

"It saw the surfer and just made a beeline for him... I thought, 'I'm going to watch a shark attack.'"

Realizing that the surfer had no idea the shark was out there, Stanley turned on his jet ski and revved it loudly several times in an attempt to draw the shark's attention away.

It worked and Stanley was able to scoop up the surfer on his jet ski but the shark then started heading for the waiting lineup of surfers at Mavericks.

Stanley raced out to those surfers and alerted them about the huge shark, pulling as many as he could onto his rescue board and towing the rest in on their surfboards.

"I had like eight people in," recalled Stanley "I basically evacuated Mavericks!"

Great white sharks have been spotted before near the Half Moon Bay surf spot and several surfers have been attacked, but Stanley said he's never seen anything like this before.

"The shark was definitely inspecting us... I'm not sure if it was going to attack that guy.. but this was definitely the scariest encounter I've ever had in the ocean."

"Such a rare and special moment in life when you get to share space in the ocean with one of these guys and learn your true insignificance. Cherish it, it doesn't happen often," Baker wrote in an Instagram comment.
Report a correction or typo
Related topics:
sportsnorthern californiasurfingsharksmavericks
Copyright © 2021 KGO-TV. All Rights Reserved.
RELATED
Swells showing promise for Mavericks Challenge
Surfing veteran survives heart attack on wave at Mavericks
Pro surfer describes what it's like to wipe out on 50 foot wave
TOP STORIES
Magnitude 3.6 earthquake strikes Maywood area, USGS says
Vanessa Bryant said LA sheriff promised to secure crash site
Vigil planned in Burbank for cinematographer killed on NM movie set
Storm heading toward SoCal prompts concern in recent burn areas
Alcohol shortage looms: 'They don't know what's coming'
Let computers do it: Film set tragedy spurs call to ban guns
Gunman in custody after shootout with deputies at Palmdale home
Show More
Ed Sheeran has COVID, will do performances from home
At least 1 killed in multi-vehicle crash on EB 10 Freeway in San Dimas
Father of teen killed in drive-by begs for peace: 'Put the guns down'
How a plane crashed with more than 20 on board and everyone survived
2 children dead as drag racer plows into spectators
More TOP STORIES News