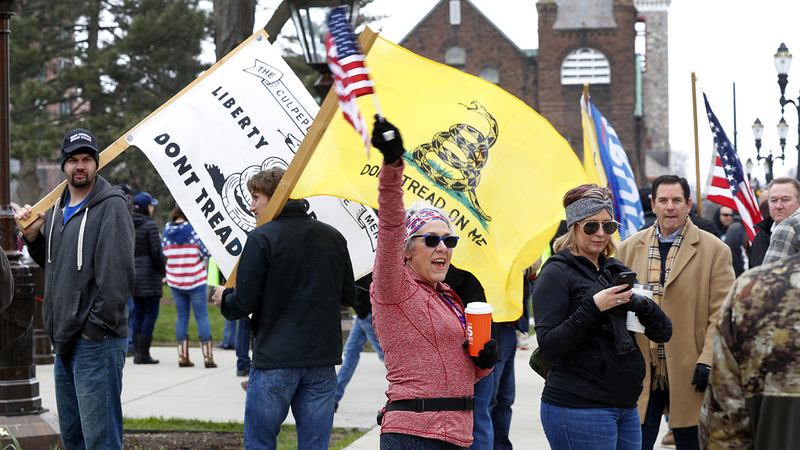 LANSING, Mich. -- Despite the relief checks, Americans have begun to protest the virus restrictions that have put at least 17 million out of work, closed factories and brought many small businesses to their knees.

In Michigan, thousands came to protest the lockdown they say has destroyed livelihoods. Some were masked and armed with rifles, but many unmasked people defied stay-at-home orders and jammed nearly shoulder-to-shoulder in front of the Capitol building. The protest was organized by the Michigan Conservative Coalition.

"This arbitrary blanket spread of shutting down businesses, about putting all of these workers out of business, is just a disaster. It's an economic disaster for Michigan," said group member Meshawn Maddock. "People are sick and tired of it."

"People are frantic to get back to work. They have been very edgy," Borkovich told The Associated Press.

Michigan Gov. Gretchen Whitmer said having so many people close together without masks would only increase infections and prolong the lockdown.

In Michigan, thousands came to protest the lockdown they say has destroyed livelihoods. Some were masked and armed with rifles, but many unmasked people defied stay-at-home orders and jammed nearly shoulder-to-shoulder in front of the Capitol building.

With many factories shut down, American industrial output shriveled in March, registering its biggest decline since the nation demobilized in 1946 at the end of World War II. Retail sales fell by an unprecedented 8.7%, with April expected to be far worse.

Behind the president's effort to accelerate re-opening the economy is a contingent of GOP allies eager to have his back.
The push to revive the economy is being influenced and amplified by a potent alliance of big money business interests, religious freedom conservatives and small-government activists, some with direct dial to Trump. They are gaining currency as a counter-point to the health professionals who warn of potentially deadly consequences from easing coronavirus stay-home restrictions too soon.

The mobilization is reminiscent of the tea party rebellion a decade ago, when conservatives roared against federal intervention in recession recovery. It's drawing a similar band of deficit hawks alarmed by the $2.2 trillion rescue package, religious congregants who say their right to worship is being violated and conservative lawmakers warning of a slide toward big government "socialism" with expanded safety net programs.

"How do you rein in some of the tyrannical enforcement?" said Rep. Andy Biggs, R-Ariz., the chairman of the House Freedom Caucus, in a radio interview.

"It's about promoting liberty and freedom," Moore said. "It's about stopping spending that will bankrupt the country and getting the $20 trillion engine that is the American economy started again as soon as possible - as in tomorrow."