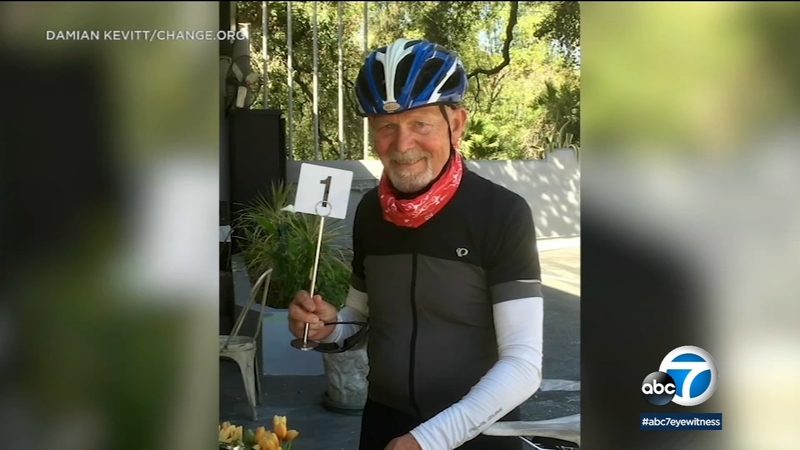 LOS ANGELES (KABC) -- A group of cyclists gathered to remember one of their own recently killed in Griffith Park by an alleged hit-and-run driver.

The cycling community is a close-knit one. More than 100 cyclists gathered Wednesday night on the side of the road where 77-year-old Andrew Jelmert was hit and killed, just a half-mile away from finishing a 67-mile training bicycle ride.

It was an emotional and raw evening, and one that this group hopes inspires change.

"Most of the people who are here were touched by his life because he was so giving, and so committed to justice that, that's why people are here," said Jelmert's partner, Andre Goeritz.

The most emotional moment of the night came when the cyclist who found Jelmert on Saturday took to the mic.

"I started compressions on him. I'm so sorry I couldn't bring him back," said Paul. "I'll regret that all my life."

A man who may have been involved in a charity bicycle ride in Griffith Park was killed Saturday by an alleged hit-and-run driver who was later arrested.

Damian Kevitt, executive director and founder of "Streets Are For Everyone," nearly lost his life 9 years ago not far from this site when a car hit his bike and dragged him for more than a quarter-mile onto the 5 freeway.

"The streets of Los Angeles are carnage," Kevitt said. "We want this park brought back to the people. We want the city and the park officials to start actually phasing out cars from Griffith Park."

"The grief is horrendous," said Goeritz. "So for me to stand here, it's only because if anything good can come out of this is just the safety for cyclists, and if I can save one life then my job has been done. It's worth it."

The man who struck Jelmert got out of his car and ran off. He was caught and arrested a short time later, and has been charged with murder and hit-and-run resulting in death.

There is a memorial ride in Jelmert's honor set for Sunday, April 24, 2022, at 8 a.m., starting at the crystal springs picnic area.