Vivek Murthy said he'd instead like to focus on targeted interventions to stop the spread of coronavirus.
KABC 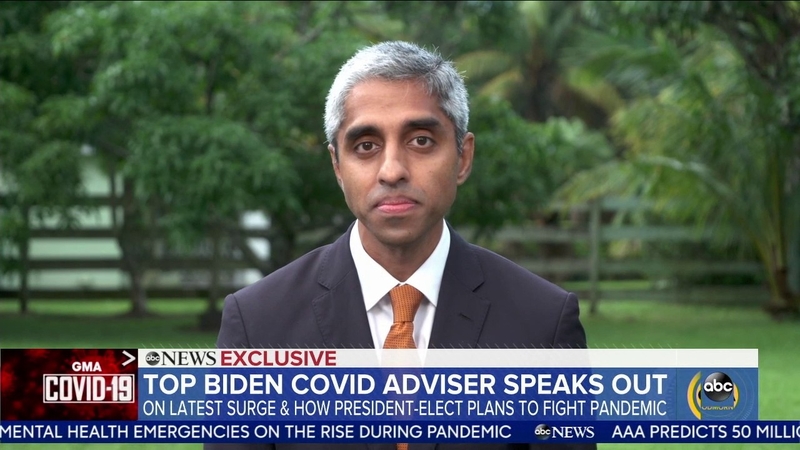 WASHINGTON -- Former Surgeon General Vivek Murthy, who is a co-chair of Joe Biden's coronavirus task force, assured that "locking down" the U.S. is unlikely under the president-elect's administration.

Speaking exclusively to "Good Morning America" Friday, Murthy said compared to spring 2020, American researchers have a much deeper understanding of how the coronavirus spreads and ways to prevent risks.

"I don't think that this is [about] a lockdown or not locking down ... The way we should be thinking about this is more like a series of restrictions that we dial up or down depending on how bad the spread is taking place in a specific region," he said.

Murthy's comments come after news reports of Dr. Michael Osterholm, another member of Biden's COVID-19 advisory team, floating the idea of a four-to-six week lockdown during an on-camera interview with Yahoo Finance on Wednesday.

Osterholm has since told ABC News that he has not discussed this proposal with the incoming administration and doesn't think there's a national consensus for it anyway.

Murthy instead on Friday pushed for targeted intervention, using the example of New York City's cracking down on hotspots by the zip code instead of enforcing citywide shutdowns.

"So we're not in a place where we're saying, 'shut the whole country down.' We got to be more targeted. If you do that, what you're going to find is that people will become even more picky. Schools won't be open to children, and the economy will be hit harder," he said. "So we've got to follow science, but we also have to be more precise than we were in the spring."

When pressed specifically on how Biden's plan would differ from the Trump administration's handling so far, Murthy stressed that a Biden plan would focus in three areas: Stopping the spread, reopening safely and protecting hard-hit populations. He pointed to the importance of testing.

"We have struggled still to this point even though we've made some progress in the last eight months. We still don't have adequate testing so anyone who wants a test can get one and get results quickly. We still don't have enough testing to be able to do surveillance testing in universities and workplaces and in other places that are higher risk like prisons and nursing homes. So that is an area where you'll see President-elect Biden focusing expanding capacity," Murthy said.