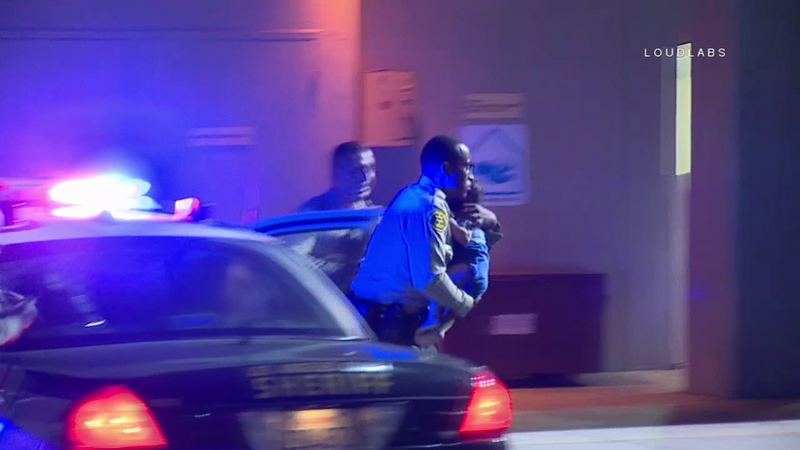 LAKEWOOD, Calif. (KABC) -- Two sheriff's deputies were being hailed as heroes for rescuing a 9-month-old boy who was found not breathing during a traffic stop Monday evening in Lakewood.

According to a spokeswoman for the Los Angeles County Sheriff's Department, Deputy Tyler Milton saw a vehicle driving erratically on Lakewood Boulevard near the 91 Freeway about 10:20 p.m.

Milton conducted a traffic stop, and when the vehicle pulled over a man quickly got out with a baby who was unresponsive and not breathing, said sheriff's Deputy Tracy Koerner.

Milton put out a radio call for help and began trying to resuscitate the child, the spokeswoman said. Deputy Alissa Farrington arrived at the scene within seconds and transported Milton and the boy to Long Beach Memorial Medical Center.

Sheriff's Department Capt. Richard Harpham details how sheriff's deputies rescued a 9-month-old boy who was found not breathing during a traffic stop.

While en route to the hospital, Milton performed CPR on the baby, who began breathing on his own before they arrived, according to Koerner.

Dramatic news video from outside the emergency room's entrance shows at least seven patrol vehicles pulling up with their lights and sirens activated, while a helicopter whirs overhead. A deputy is seen exiting one of the cars and rushing into the building with the child in his arms.

Milton and Farrington have two years of service with the department, according to Capt. Richard Harpham at the Lakewood station.

The infant was listed in stable condition, authorities said, adding that there was no evidence of foul play.

"Without a doubt - they are heroes. Their efforts saved a life," Harpham said.