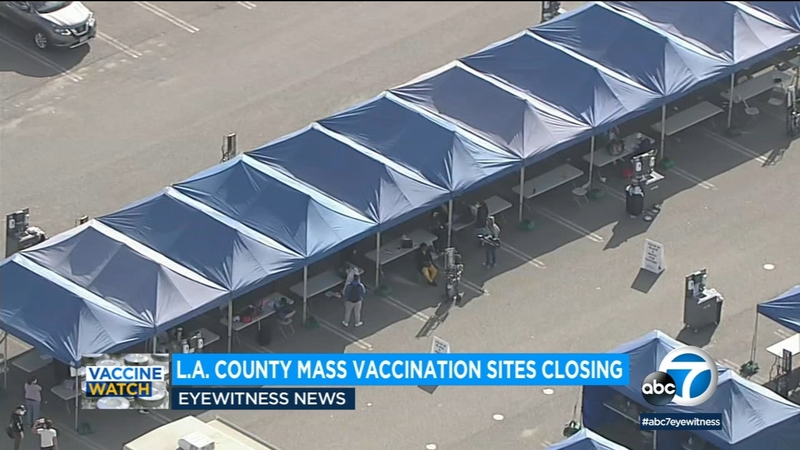 As the county looks to meet the public in their communities, closures begin Monday when the county-run site at Cal State Northridge will shut down, with operations moving to a smaller location at the Balboa Sports Complex in Encino. According to the county, people who received their first dose at CSUN will get their second dose at the Balboa site. Residents in need of transportation to the site can call 833-540-0473 to arrange a free ride.

The other large-scale sites run by the county -- at the Forum in Inglewood, the Pomona Fairplex and the county Office of Education in Downey -- will close at the end of the day June 13.

California announced the details of its full June 15 reopening plan Friday. The state is removing all capacity limits and physical distancing requirements, regardless of the business or setting.

Those three sites will operate from 11 a.m. to 6 p.m. Tuesdays through Saturdays.

The county is hoping to improve access to vaccines by deploying mobile vaccine teams into neighborhoods that are higher-needed, hardest-hit areas.

Health officials are trying to encourage all eligible residents over the age of 12 to get inoculated by offering incentives, including season tickets up for grabs to the Los Angeles Dodgers and Los Angeles Football Club.

Between last Friday and this coming Thursday, anyone who gets a first-dose vaccine at a county- or city-run vaccination site, or at a St. John's Well Child and Family Center site, will be entered for a chance to win season tickets to the Dodgers or LAFC. The contest is open to anyone receiving a first dose, or people receiving a second dose who bring another person with them to be vaccinated.

The state of California, meanwhile, is offering financial motivation to encourage people to get vaccinated. On Friday, the state held the first of two planned drawings, awarding $50,000 in cash to 15 people who have been vaccinated. A second drawing will be held on Friday, June 11 to pick another 15 winners.

California selected the first 15 winners of a $50,000 grand prize as part of the state's "Vax for the Win" program on Friday.

Three of the winners are from L.A. County, state officials said.

County Public Health Director Barbara Ferrer said Wednesday that the slowed pace of vaccinations means it will take the county until late August to reach the target of getting 80% of the population at least partially vaccinated. About 100,000 vaccine doses are being administered in the county each week, down from a peak of about 500,000 per week.

According to figures released by Ferrer, roughly 64% of county residents age 16 and older have received at least one dose so far, while roughly 53% of residents in that age bracket are fully vaccinated.

Officials say about 100,000 L.A. County residents are getting vaccinated per week.

"We have about 1.1 million more first doses to go before 80% of all L.A. County residents 16 or older have received at least one vaccine," Ferrer said.