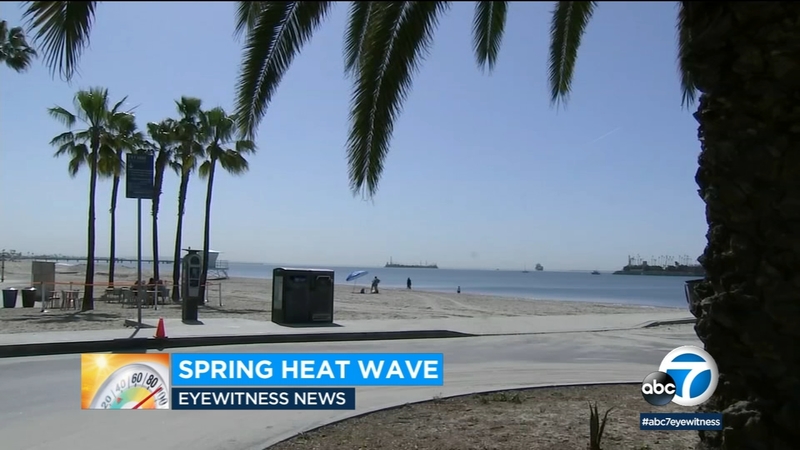 Heat advisories are scheduled through Friday for much of the region, including Orange County and the San Fernando, San Gabriel and Santa Clarita valleys.


Los Angeles and Orange counties Thursday will see temperatures in the high 90s and some gusty winds squeezing through passes and canyons bring elevated fire danger to the region. Temperatures Friday are expected to reach 96 degrees, but a cooling trend sets in over the weekend.

According to the National Weather Service, preliminary records that have either tied previous records or have been broken as of Thursday include the temperature at the Los Angeles International Airport, which hit 94 degrees.

This weekend, the Acura Grand Prix is expected to bring out 180,000 spectators to Long Beach, but the heat isn't stopping race fans from enjoying their weekend.

People who might seek relief in Northern California rivers were warned that waters were still running cold due to snowmelt. The conditions elevated fire danger but red flag warnings were not issued because vegetation remains relatively green. Firefighters and helicopters quickly extinguished brush fire Wednesday in Los Angeles County.


The heat was predicted to persist through Friday before dramatic cooling during the weekend brings a chance of precipitation early next week, including mountain snow showers.

The spring heat wave follows an exceptionally dry winter that leaves California to face another year of drought and tightening water supplies.
The Sierra Nevada snowpack, a key part of the water supply, is just 30% of the April 1 average, the date when it historically is at its peak, according to the California Department of Water Resources.

The Sacramento weather office said the outlook for mid-April and beyond favors a continued warmer-than-normal temperature pattern.