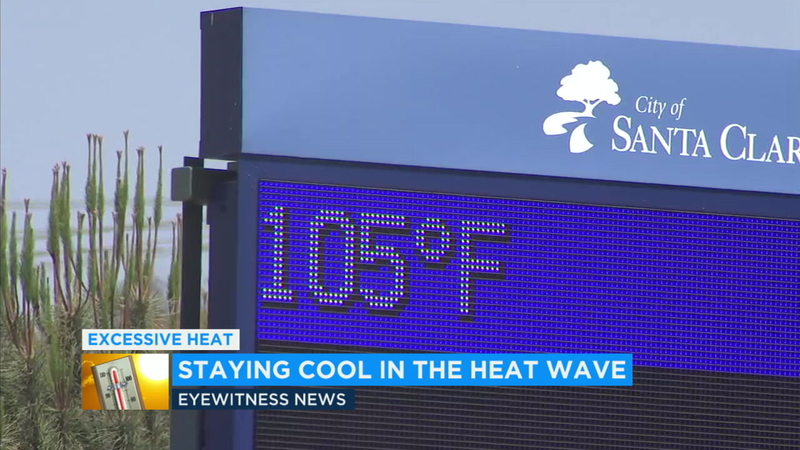 LOS ANGELES (KABC) -- The intense heat broke a heat record and tied with others in a few areas of Southern California Wednesday.

Temperatures reached 85 degrees in Oxnard, tying with a record set in 1974. The same went for Palmdale, which hit 109 degrees. It was a record first set in 1975.

Cities and neighborhoods all over the Southland experienced hot and slightly muggy conditions. People all over tried what they could to stay cool by either heading to cooling centers, going to the beach or to nearby water parks and pools.

Lifeguards along the coastal areas warned people to be wary of powerful waves and strong rip currents as a high surf advisory remained in effect.

Experts advise people to drink plenty of water and stay as wet and cool as possible while outdoors during the height of the triple-digit heat wave.

The city of Los Angeles has been looking for ways to beat the extreme heat that comes every summer. Under a pilot program that started last year, crews resurfaced some neighborhood streets with a reflective surface called "cool seal." The gray seal is supposed to cool off streets by as much as 10 degrees lower during hot days.

One street in every district in the city was resurfaced as part of the program. City Councilwoman Monica Rodriguez believes cooling streets that don't absorb heat mean cooler neighborhoods.

"We recognize that we're trying to help combat the significant increases in heat that cities experience, and really eliminate the heat-island effect. We're doing this by trying to plant more trees and create environments that are more healthy and safe for our neighborhoods," she said.

In the Inland Empire, neighborhoods suffered power outages and dry conditions. A massive brush fire erupted in Idyllwild, prompting hundreds of evacuations as the flames moved dangerous close to homes.