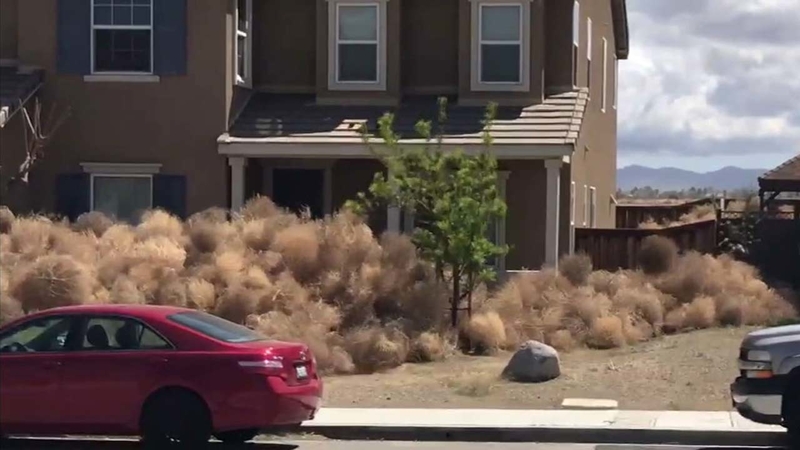 VICTORVILLE, Calif. (KABC) -- The heavy winds sent an onslaught of tumbleweeds into the High Desert, virtually burying some homes in the community.

Residents in Victorville say it's unlike anything they've seen before, describing it as an "invasion" of tumbleweeds.

Monday, hundreds of the wind-tossed bushes piled up on the yards of many area properties.

"Normally you get a few flying down the street or whatnot, but never this many that will stack up even this much, and this is mild compared to what it was actually in the back yard and in the front of the house. So no, it's never been this bad," said Tanya Speight of Victorville.

Fellow resident Ralph Zavale said it was all too much, and he couldn't clean them all up in time since the tumbleweeds kept coming and coming.

Crews with the city's Code Enforcement Division were out in force to help with the cleanup. They collected tumbleweeds by the truck full and moved them out.

Victorville resident Bryan Bagwell said his backyard was stacked full of the prickly weed. While he's thankful for the city's help, he wants more to be done to prevent the problem.

"The people that own the property need to do something about it but they won't drag it. They won't respond to the city from what I understand," Bagwell said.

The problem stems from open fields in the area. When the wind kicks up, the tumbleweeds begin rolling in.

Resident Nav Mangat recorded video of her neighbor's home, which was covered in tumbleweeds. Mangat says at least one of her neighbors became trapped for two hours until crews could remove the pileup from his front doorway and garage.