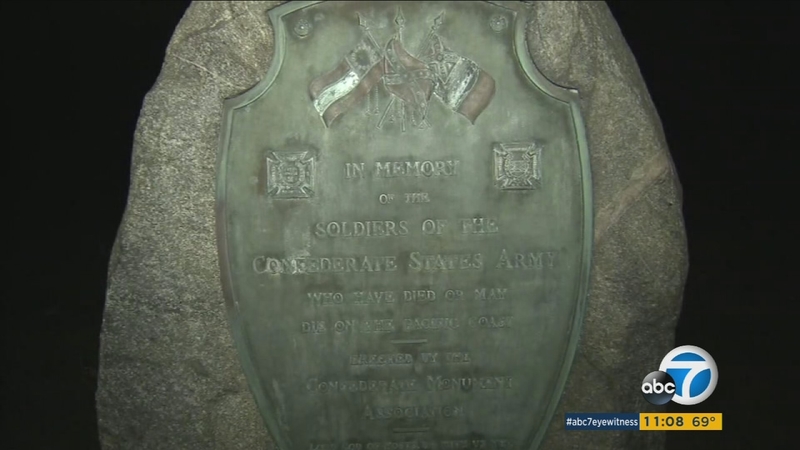 HOLLYWOOD, LOS ANGELES (KABC) -- Many people urged the Hollywood Forever Cemetery to remove a Confederate memorial on the property, and the group which owns the stone piece chose to do so Tuesday.

The memorial has been at the cemetery since 1925, but the decision to remove it came in a matter of hours because of growing outrage after the Charlottesville, Virginia chaos and threats of vandalism.

"It just ignited here, where we started getting a lot of calls, a lot of emails, a lot of social media posts and online petitions asking us to remove it," president and co-owner of the cemetery, Tyler Cassity, said.

But this is a unique case, cemetery officials said, because the monument is not on public property and is owned by the Long Beach chapter of the United Daughters of the Confederacy.

The cemetery reached out to the group, who asked to have the monument removed before any serious damage was done. Earlier Tuesday, someone had vandalized the bronze plaque with graffiti.

Officials said more than 30 grave markers of the Confederate soldiers and their families buried around the site will remain, but the massive stone monument will be gone.

"The Daughters said we are a benevolent organization. We didn't seek this attention. We don't want to be part of this uproar," Cassity said.