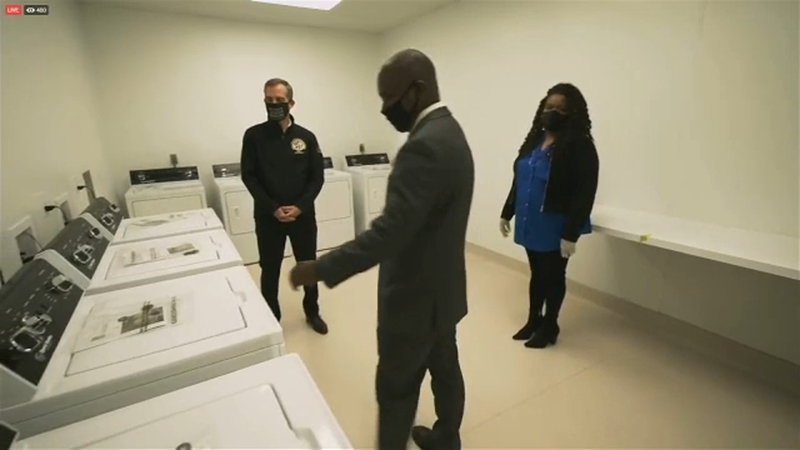 LOS ANGELES (CNS) -- A navigation center providing a variety of services to homeless Angelenos opened on Monday in the Vermont Knolls area of South Los Angeles.

The center is the second to be funded by Proposition HHH, which was approved by voters in November 2016. The first was opened in North Hollywood in February.

"This is the first navigation center in the Eighth District and really around South Los Angeles,'' said Harris-Dawson, who co-authored proposition HHH. "Folks who are houseless will be able to come here and get a shower, store their materials, get guidance from counselors for job training, mental health treatment and all the other things that the city has helped make available.''

The center, which will be open every day but Sunday, has a laundry room with four washing machines and four dryers, a unisex hygiene room with private showers and a storage room with 130 bins, according to Lewis. The laundry room provides free detergent from a vending machine, and the hygiene room is stock with soap and shampoo.

The bins are stored in a room that only staff can access, and they are brought out to a separate room for people to pack or unpack them.


"It's really a chance to restore human dignity,'' Lewis said.

"That's what it's all about, the things we take for granted, taking showers, having clean clothes, having safe places to store things we care about, that's what this navigation center represents.''
Aside from what Lewis called "human dignity services,'' the navigation center provides case management and housing navigation support to help people on the street get into permanent housing.

A majority of Southern California residents say a measure aimed at creating housing for the homeless is failing, according to an exclusive Eyewitness News poll.

The facility, created in a decommissioned fire station which had become a homeless encampment, is adorned with a blue and gold mural to represent hope and awakening, Harris-Dawson said.

"We're happy to be able to turn it around and turn it into a place for hope, so you know when we see people on the street now, neighbors you know, if you see somebody who doesn't have a place to go and needs a place to put their things and to get a shower, they can come to the navigation center,'' he said.

Proposition HHH more than tripled Los Angeles' annual production of supportive housing, according to Garcetti's office. The city is working on 110 homeless housing developments with funding from the $1.2 billion bond measure.