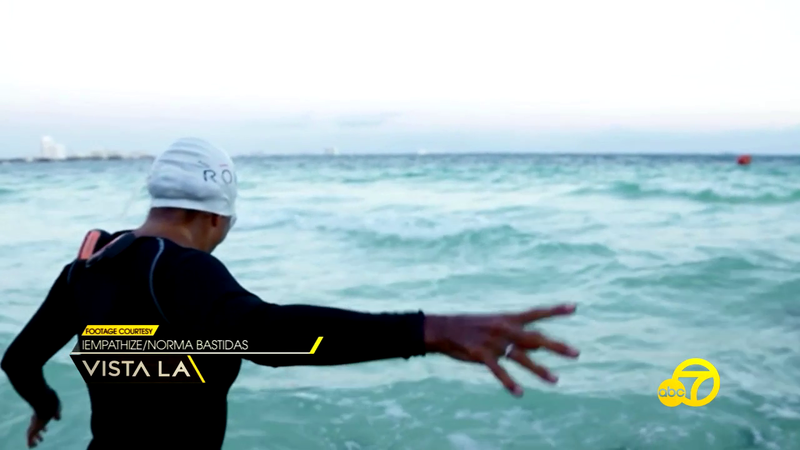 LOS ANGELES, Calif. (KABC) -- Truth can be stranger than fiction. It would be difficult for most Hollywood screenwriters to imagine Norma Bastida's real-life story of survival.

"I grew up in Mazatlan, Mexico, the youngest of five children," said Bastidas. "Growing up it was a very difficult environment because of the cartels and surviving sexual violence there. Unfortunately, it's the reality for a lot of young people."

Her father died when she was 11 years old, and the family fell further into poverty. In her adolescence, she fell prey to sexual abuse.

"For the longest time, because of the circumstances, I just survived. So I was trying to escape that when I was offered a (modeling) job in Japan. It turned out to be not a real job offer, and I ended up being trafficked into a bar and it became an escort."

Eventually, Bastidas was able to pay off her captors and flee to Canada. She married, had two children, attended college and secured a job. Just as she had achieved a sense of normalcy, she was confronted with yet another obstacle. Her oldest son was diagnosed with cone rod dystrophy, a progressive condition which leads to blindness.

Norma's love for her sons fueled her motivation to overcome. It also led to the discovery of a hidden talent and a calling, which became a powerful form of healing.

"Running was a way to confront all those demons I had. Within 6 months, I ran my first half marathon and that's when I thought, 'you know what, I'm going to test my limits," said Bastidas.

She went on to run her first full marathon and qualified for the Boston Marathon. She then took on Ultra-Running and people took notice. After securing a sponsorship, she decided to take on a world record.

The record setting trek involved running seven of the most unforgiving environments on the planet-through jungles and deserts across seven separate continents.

Despite gaining international attention for her world record-setting runs, Bastidas wasn't yet ready to reveal her full story. But after a negative encounter with a potential sponsor, she was emboldened to let her truth be known.

Now determined to be a voice for human trafficking survivors she decided to take on her biggest challenge yet--the Guinness record for the world's longest triathlon, a record held by a man.

"I called an organization here in Los Angeles and said, 'Let's do it. Let's just not break it, let's smash the record," said Bastidas.

Norma's pursuit of this incredible feat is chronicled in the documentary "Be Relentless" produced by iEmpathize.

"I wanted to go from Cancun to Washington D.C. to follow a human trafficking route to connect both countries. It was 3% swimming, 78% cycling and 20% running. It was 95 miles swimming and I didn't know how to swim. But I was determined."

Bastidas is now an inspiration for women everywhere. She shares her remarkable story with organizations like the East L.A. Women's Center-and other groups empowering women throughout the world. Recently, she was invited to speak at the United Nations-advocating for victims of human trafficking and sexual violence.