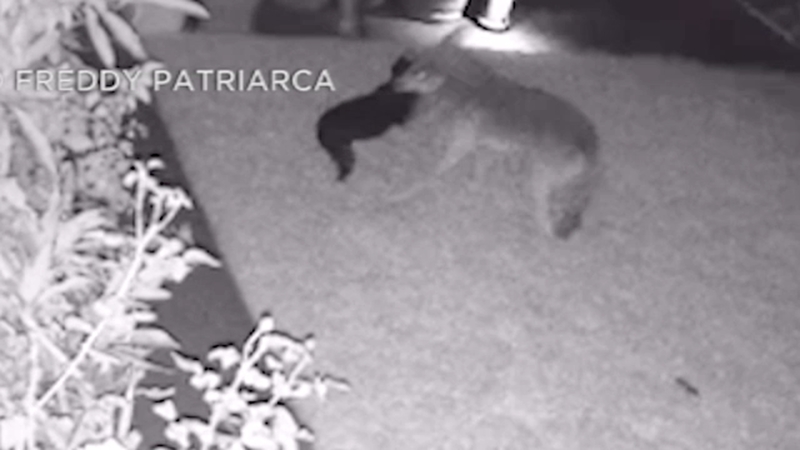 HUNTINGTON BEACH, Calif. (KABC) -- A family in Huntington Beach wants the city to address the rise in wild animal encounters in their neighborhood after their Boston terrier was attacked by a coyote.

The incident was caught on security camera, too difficult to watch for Melissa and Freddy Patriarca.

Their Boston terrier, Sadie, screeched in pain, as a coyote shook her violently by the neck.

"My heart was breaking when I heard her scream," Freddy said. "And just knowing that a wild animal like a coyote could just jump the wall so easily, and almost take our loved one away."

The video then shows brother Cody, a lab, save the day. Now with backup, Sadie, the alpha of this pack, even helps chase away the predator.

"Big brother came to try to save her, and even her, like running after the coyote after," Melissa Patriarca said.

After suffering a few bites, Sadie was on antibiotics and back to her normal self Monday. The Patriarcas were grateful they were in the kitchen on that night with the door open, and able to hear their pet's cries for help.

REALTED | Child hospitalized after being attacked by coyote in Huntington Beach; search underway for animal

A young girl was in the hospital Friday morning after she was attacked by a coyote in Huntington Beach, prompting a search for the animal.

"It's unfortunate. It doesn't surprise me. I hear them howling on the streets at night or in the wee hours just before sunrise," Taylor said.

Taylor, a handyman, said that he's been busy with homeowners looking to keep wildlife off their properties.

"I've seen a huge uptick in the past year where people are calling me on the Nextdoor App to install coyote rollers, heightened fences, chain link, chicken wire," Taylor said.

Though Sadie was safe, the Patriarcas want the city to step in. They worry about the safety of their dogs and children.

"Coyotes are walking down the streets in the daytime now," Melissa Patriarca said. "I mean, I've seen them by kids' schools. It's unsafe."

The Patriarcas said they reported the incident to the city through an app but have not heard back yet from officials.

Eyewitness News reached out to Orange County Animal Care Monday for comment but has yet to hear back.