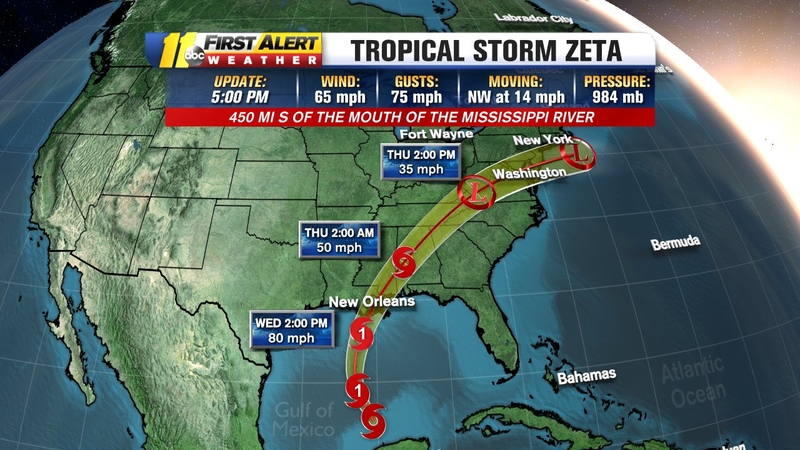 RALEIGH, N.C. -- Zeta weakened back into a tropical storm overnight as it moved over the Yucatán Peninsula, but the system is expected to restrengthen before hitting the U.S.

According to the National Hurricane Center, Zeta has maximum sustained winds of 70 miles per hour, and it is moving northwest at 15 miles per hour.

Working over land has weakened Zeta, but it is expected to strengthen back to Hurricane level as it heads toward open water. Hurricane Warnings were issued for the coastlines in Louisiana and Mississippi.

#Zeta now down to a TS, but expected to strengthen back to Hurricane level as it heads toward open water. US landfall expected Wednesday afternoon/evening. #TropicalUpdate pic.twitter.com/rYe2Q36Ak1

Parts of the peninsula are under a hurricane warning. Zeta will head into the Gulf of Mexico and start tracking toward Louisiana, where it is expected to make landfall sometime Wednesday afternoon. The area could feel tropical storm-force winds by as early as Wednesday morning.

Louisiana has felt the brunt of the record-setting 2020 hurricane season. So far, four named storms--Cristobal, Delta, Laura, and Marco--have made landfall in the state.

Storm Ready 2020: Preparing in a Pandemic

ABC11 gets you storm ready for hurricane season amid a pandemic. Watch the full one-hour special.