"Inmates who have stood on the frontlines, battling historic fires should not be denied the right to later become a professional firefighter," Gov. Newsom said.
KGO
By Kayla Galloway 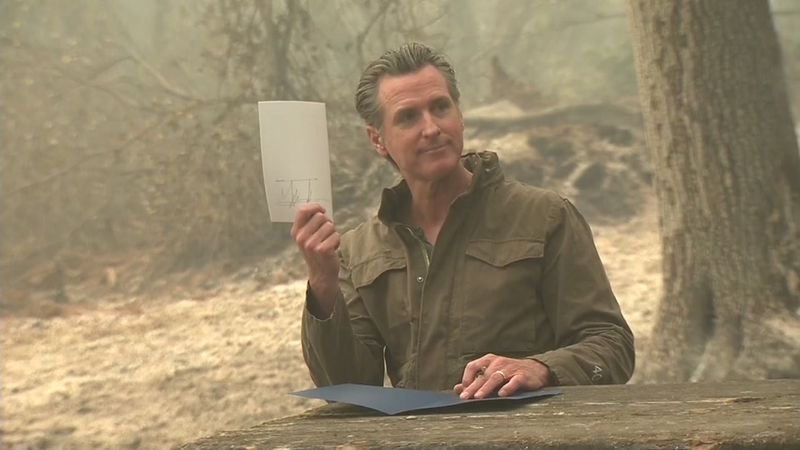 "Inmates who have stood on the frontlines, battling historic fires should not be denied the right to later become a professional firefighter," Gov. Newsom said on Twitter after signing the assembly bill into law.

Inmates who have stood on the frontlines, battling historic fires should not be denied the right to later become a professional firefighter.

The bill paves the way for California inmates who've worked on the frontlines of wildfires to work professionally as a firefighter once they've successfully completed their prison time.

CAL FIRE trains minimum security prison inmates and pays them $1 per hour while in the field and $2 per day when they're not on duty, the Associated Press reported.

Inmates normally have their sentences reduced for each day spent fighting wildfires, the AP reported.

Inmates' work is similar to that of any California firefighter, with long hours and firefighting on the frontlines.

The number of inmate firefighters is down nearly one-third this year compared to 2019, a corrections department spokesperson told the AP last month.

Thousands of lower-level inmates have been released in California because of the COVID-19 pandemic, lowering the state's firefighting resources.

In an Aug. 24 report, the state corrections department said there were 1,354 inmate firefighters battling the state's wildfires this year.

With Gov. Newsom's signing of Assembly Bill 2147, inmates in California who serve in the state's conservation camp program would have a faster path to expungement.

"This bill would allow a defendant who successfully participated in the California Conservation Camp Program or a county incarcerated individual hand crew as an incarcerated individual hand crew member, and has been released from custody, to petition to withdraw their plea of guilty or plea of nolo contendere and enter a plea of not guilty," the bill reads.

RELATED: How wildfire smoke can impact your health

Inmates convicted of murder, kidnapping, rape, lewd acts on a child, felonies punishable by death, sex offense requiring registration and arson would be ineligible under the law.

According to the legislation, nearly 800 inmate firefighters helped battle the deadly Camp Fire in Butte County and 400 helped with the Kincade Fire in the Sonoma County in 2019.

VIDEO: How to prepare for a wildfire evacuation
EMBED More News Videos