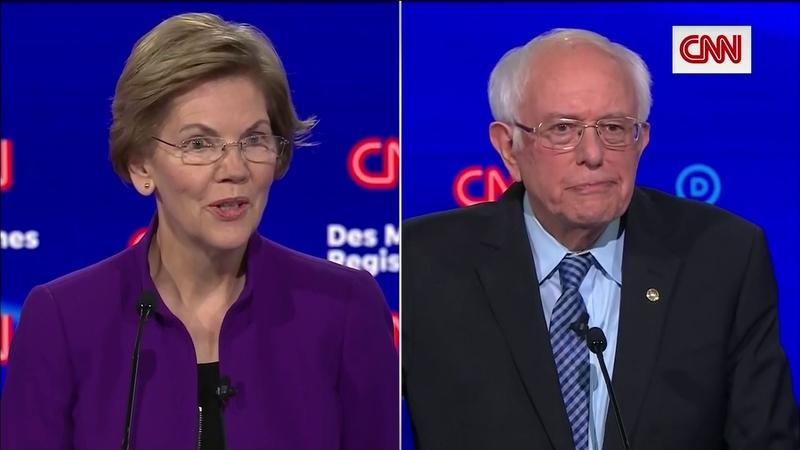 Warren, Sanders debate how long ago 30 years was

DES MOINES -- Sen. Bernie Sanders said he will "do everything in my power" to help elect a female Democratic nominee, a day after reports surfaced alleging that he told Sen. Elizabeth Warren in a 2018 meeting that he didn't think a woman could win the White House.

Sanders was asked about the alleged remark Tuesday evening during the CNN Democratic debate in Iowa. He doubled down on his denial that the exchange even occurred, saying: "It's incomprehensible that I would think that a woman cannot be president of the United States. Go to YouTube. There's a video of me 30 years ago talking about how a woman could become president of the United States."

He then pointed out that Hillary Clinton won the popular vote by nearly 3 million votes in 2016, saying, "How could anybody in a million years not believe that a woman could become president of the United States?"

Asked for her response, Warren said: "Can a woman beat Donald Trump? Look at the men on this stage. Collectively, they have lost ten elections. The only people on this stage who have won every single election that they've been in are the women -- Amy [Klobuchar] and me."

During the January Democratic debate, Bernie Sanders said it was "incomprehensible" that he would say a woman couldn't be elected president after reports surfaced alleging he made that comment privately to Elizabeth Warren in 2018.

Warren then began counting quietly with her finger, asking, "Wasn't it 30 years ago?" Sanders noted his win again and then said the dispute isn't a pressing concern.

CNN first reported Sanders' comment earlier Monday, based on the accounts of anonymous people with knowledge of the meeting. Warren then said in a statement Monday that during their two-hour meeting two years ago to discuss the 2020 election: "Among the topics that came up was what would happen if Democrats nominated a female candidate. I thought a woman could win; he disagreed."

That drew a swift and strong denial from Sanders, who said, "It is ludicrous to believe that at the same meeting where Elizabeth Warren told me she was going to run for president, I would tell her that a woman couldn't win."

Sanders aides then accused Warren's campaign of leaking what they said was an inaccurate description of what was said during the meeting.