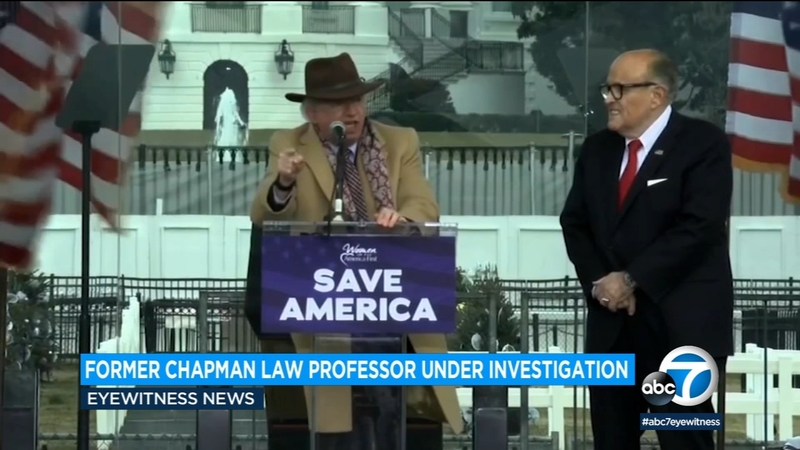 Eastman's attorney, Randall Miller, said his client believes the investigation will exonerate him.

"Dr. Eastman, a nationally recognized constitutional attorney and scholar, represented former President Trump in several election challenges,'' Miller said in a statement. "As was his duty as an attorney, Dr. Eastman zealously represented his client, comprehensively exploring legal and constitutional means to advance his client's interests. Subsequent to that representation, he also sought to protect his client's privileged communications 'at every peril to himself,' as his ethical obligation under the California Rules of Professional Conduct and California Business and Professions Code section 6068(e)(1). Dr. Eastman expects the bar's investigation into these matters will fully exonerate him from any charges.''

The State Bar announced Tuesday that it has been investigating Eastman since September to determine if he has "engaged in conduct in violation of California law and ethics rules governing attorneys following and in relation to the November 2020 presidential election.''

By law, the specifics of the investigation must be kept confidential.

"A number of individuals and entities have brought to the State Bar's attention press reports, court filings, and other public documents detailing Mr. Eastman's conduct," State Bar of California's Chief Trial Counsel George Cardona said in a statement. "We want to thank those who took the time to bring to our attention this information, which serves as the starting point for our investigation. We will be proceeding with a single State Bar investigation in which we will continue to gather and analyze relevant evidence and go wherever it leads us."

Eastman was forced out of Chapman when multiple faculty members objected to his representation of Trump, as the former president made oft-debunked claims of a "rigged'' election that led to his defeat to Joe Biden.

The Jan. 6 committee investigating the Capitol insurrection is now shifting its focus to computer servers at Southern California's Chapman University.

Eastman also attended the rally that preceded the Jan. 6 insurrection at the Capitol and provided a plan to Trump that would have then-Vice President Mike Pence block certification of the election so new state electors could be appointed who could overturn the election results.

Eastman sued the congressional Jan. 6 commission after Chapman agreed to release about 30,000 emails to the commission from his law school account.

U.S. District Judge David Carter rejected Eastman's injunction request, but attorneys for Eastman and the commission are negotiating which emails would not be considered privileged and which ones could be handed over.