Jonathan Flagler, who was described as a devoted father of three, dedicated two decades to the fire service.
KABC 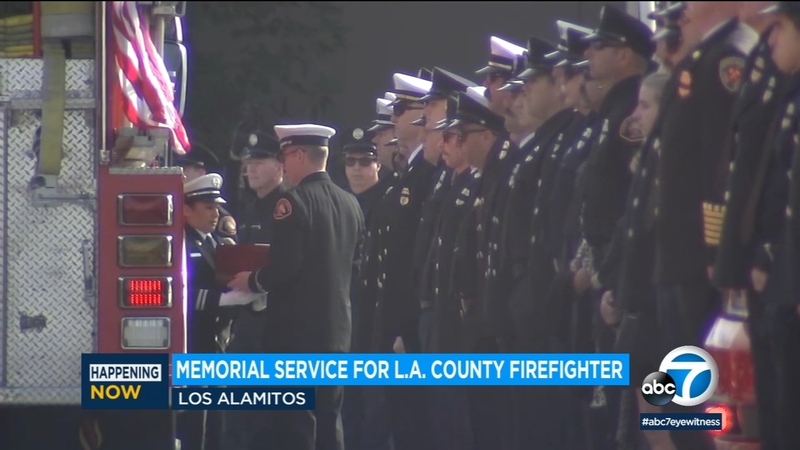 Jonathan Flagler, 47, was overcome by smoke and flames while battling the fire earlier this month. He was pulled from the fire by fellow firefighters and was taken to the hospital where he later died.

Flagler was fondly remembered as a man who loved his family, as well as his firefighting family, during funeral services at the Cottonwood Church in Los Alamitos. Hundreds of firefighters from the Los Angeles County Fire Department and other departments across the state were in attendance.

He is survived by his two teen sons and wife, who spoke at Friday's service.

"John was my soulmate, plan and simple. It takes some people decades to find the person they're meant to be with," she said. "It takes others several tries to find them and some never do. I am one of the lucky few that found him on the first try."

A solemn flag ceremony was held Thursday for Flagler, who dedicated two decades to the fire service, in Vernon.

AIR7 HD was over Fire Station 13 in Vernon, where Flagler started his career in 2002.

A solemn flag ceremony was held Thursday in Vernon for a Los Angeles County firefighter who died battling a house blaze in Rancho Palos Verdes, honoring a man who dedicated two decades to the fire service.

He was mostly recently assigned to county Fire Station 83. A flag that flew over that station was raised at Station 13 during Thursday's ceremony, then later lowered, formally folded and was presented to Flagler's family.

"We'll always remember the day we lost our brother," county Fire Department Chaplain Vince Roldan said during the ceremony. "Jon was a true hero. And he lost his life in the line of duty upholding his oath to protect the lives and property of the community he served."