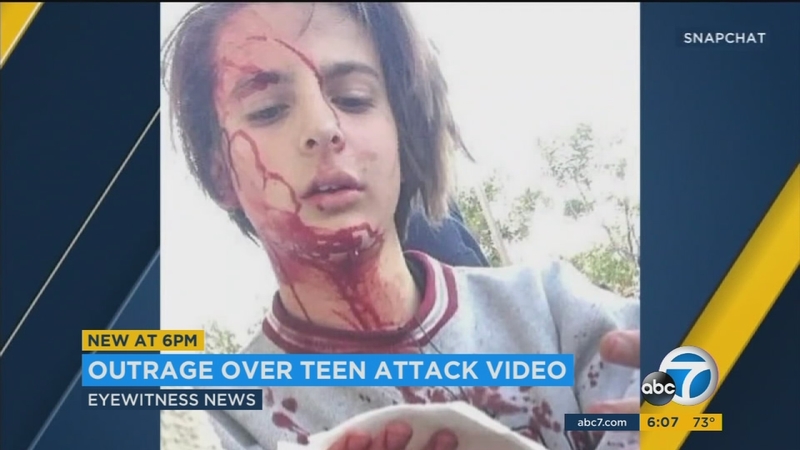 WEST HILLS, LOS ANGELES (KABC) -- A California assemblyman believes those who film violent crimes should face charges along with the attacker. He is introducing a bill to crack down on conspirators.

The incident, which was recorded and shared on social media, sparked outrage among community members, who demanded an end to such bullying.

State Assemblymember Matt Dababneh (D-Encino) says the filmed attack is part of a shocking surge of violent attacks for the purpose of filming and sharing on social media.

"We know that the attack on Jordan happened among two friends, I believe it was a boyfriend girlfriend, that had conspired together to do this crime to put on social media," Dababneh said. "This is not an isolated incident. Throughout our community and across our country, we've seen a very dramatic uptick in these kinds of cases."

While still recovering from his serious injuries, Jordan is trying to come to terms with the senselessness of randomly being attacked.

"Why? I didn't know him so why would he do this to me? Like, I'm not saying it should happen to anybody, but out of everybody, why would it happen to me?" Jordan said.

The assemblyman said he was in disbelief that although the person who attacked the victim is facing charges, the person who purposely filmed is not.
Dababneh is introducing a bill known as Jordan's Law. It would criminalize those conspiring with an attacker to videotape a violent crime.

"They are conspiring to tape it and to upload it onto social media and that is wrong. To me this is no different than someone driving the getaway car in a bank robbery," Dababneh said.

"Recording violence and sharing it has to stop, and that's why I am here today," said Jordan's father, Ed Peisner.

Attorney Marc Berkman said Jordan's Law would be clear not to target innocent bystanders filming an attack or other types of crime.

He said there are ways to prove that a conspirator worked with an attacker to videotape the violent crime - including overheard conversations, text message and emails.

Dababneh said he hopes to get the bill to the governor's desk and signed, giving the law teeth before the end of the year.