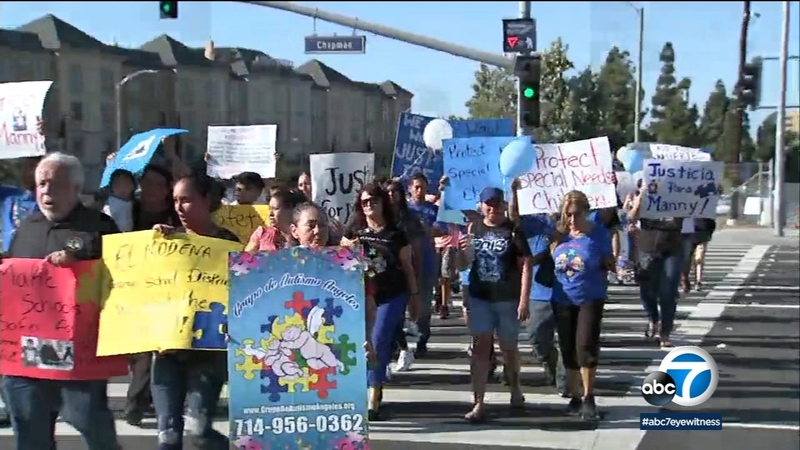 ORANGE, Calif. (KABC) -- Dozens of protesters turned out for a rally and march in Orange to call for justice for a special needs student who died in a golf-cart crash at his school.

The Orange Unified School District said Manny was under supervision by an aide at the time of the incident, and that others tried to stop him unsuccessfully when he got on the golf cart.

It appears there was a key in the golf cart and it was idling at the time that he jumped in.

Manny's family last week announced the filing of a lawsuit against the Orange Unified School District, claiming officials should have done more to supervise the special-needs student.

The "Justice for Manny" rally called for transparency in the investigation and emergency measures to prevent similar tragedies.

Dozens of protesters - many belonging a group that supports parents of Latino children with autism - rallied in orange to demand justice.

"It's very hard as a parent to lose a kid - more a kid with special needs because they are our angels," said parent Claudia Serna.

Others said the golf cart should not have been left unguarded with the key.

"I'd never met him before but I got to know and see what a beautiful young bright energetic boy he was," Hernandez said.

Hernandez and other demonstrators criticized a school district policy on not touching students.

They believe in this case the teen's death could have been prevented.

"The school policy of 'no touch' did not prevent them stepping in in case of emergency," Hernandez said. "There's a state law that would have protected them."

The protesters say they want accountability and they want Orange County officials to take steps to prevent another tragedy.