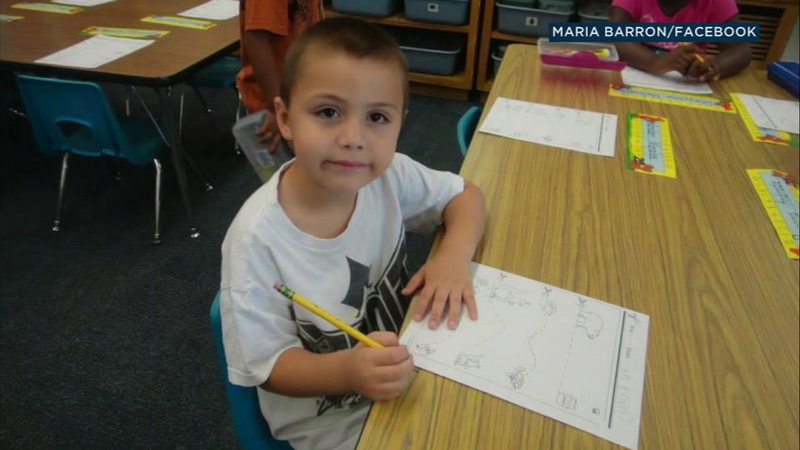 LOS ANGELES (KABC) -- A Los Angeles Superior Court judge Monday ordered the unsealing of transcripts of the grand jury proceedings in the case involving the death of Anthony Avalos.

Eyewitness News has obtained a copy of the lengthy document, which describes in detail what happened to Anthony during the last day of his life.

Anthony's mother, Heather Barron, and her boyfriend, Kareem Leiva, are charged with torturing and murdering the 10-year-old boy. The grand jury heard the evidence the prosecutor has against the defendants and decided to indict them.

The assistant district attorney in the case, Jonathan Hatami, described to the grand jurors in his opening statement what Leiva and Barron allegedly did to Anthony prior to his death on June 20, 2018: "The coroner's report documented injuries all over Anthony's body," Hatami told the grand jury. "There were injuries to Anthony's side and his hip area, both his left hip and his right hip, and his arms, and even injuries to his feet."

Hatami said Anthony had bruises and abrasions all over his entire body, including abrasions and bruises around his face and his nose and his forehead. He had circular marks on his stomach and below his nipple, multiple abrasions on both knees and on his back, contusions and scabs on all four of his extremities.

The prosecutor told the grand jury that Barron and Leiva committed these heinous acts by beating Anthony with belts, beating him with a vacuum hose, a vacuum cord, with fists, wrestling moves, chokeholds, feet, slapping him in the face, torturing him by making him kneel on rice, with hot sauce, slamming his head against the floor, locking him in his room for days. They didn't provide him with food or water, made him hold books and weights and made him fight his siblings.

"The evidence will clearly show that Leiva and Barron are ultimately responsible for the torture and eventual murder of Anthony," the prosecutor said.

The prosecutor asked the grand jury to hold the defendants responsible for Anthony's murder.

The grand jury also heard from Anthony Avalos' 8-year-old younger sister. According to Hatami, she too was abused by her mother Heather Barron, and her mother's boyfriend Kareem Leiva.

Hatami showed the girl various pictures of her and her siblings. She told the grand jury who they were, including Leiva and her mother, Barron.

"Do you still love your mom?" Hatami asked the girl. "Yes," she responded. She also said she misses Anthony.

Hatami showed the girl a picture and asked her to describe what it was. She said one day hers and Anthony's 7-year-old brother was in trouble and Leiva made him kneel in the corner. "If you didn't do that and you cried 'cause it hurts, you would get rice there and go on your knees," the girl recalled.

She said she too had been forced to kneel on rice and that it hurt. Both Leiva and Barron made the children kneel on rice, the girl said.

The girl said that after she or her brothers were done with the punishment of kneeling on rice, she would have to clean up all the mess. "Was there any blood on the rice?" Hatami asked. "Yes," the girl responded. She said Leiva would put his feet against their knees to push harder into the rice. They cried, she said, but Leiva would not let up until the crying stopped.

Anthony's sister told the grand jury he had lots of "boo-boos" on his knees because he was forced onto the rice a lot. "One time, Kareem dragged him on the carpet and he got a rug burn," the girl recalled. She also said sometimes they would have to stand in the corner from when they'd get home from school until 8 p.m.

"Sometimes we would like go in the hallway, the little wall between my room and my mom's room, we would have to go there on our knees and carry books and with two weights on top tied all together and we would have to hold it for like 10 minutes," the girl described. "What about if you couldn't hold them?" Hatami asked. "If they fall, we would have to start all over again and get another hour," she said.

Anthony's sister testified that one time, as punishment, Leiva had Anthony carry a brick inside the house. "Someone threw a brick in our car and so he took it out from the backyard and bring it to Anthony and had him carry it." Hatami asked if Anthony looked sad. "Yes, he was crying," she responded. "What'd mommy do?" the prosecutor inquired. "She was just in the room yelling at him to stop crying," the girl said.

"When (my other brother), me and Anthony were in trouble, we would go on the rice and Kareem would spank us with the belt on our feet," the girl told the grand jury. "It hurt, so we were crying." She said her mother hit her, Anthony and her other brother with a belt on their bottoms once.

The girl also described Leiva using wrestling moves on them.

The girl said her mother was sometimes watching the whole thing and never asked anyone to stop.

The girl said both Leiva and her mother would make them do "captain's chair," where one stands against the wall with knees bent like sitting in a chair. If they moved or cried, she said, they had to start all over again. She testified that if they didn't do the punishment right, they would have to do exercises from a workout list.

Anthony's sister told the jury Leiva beat Anthony with a vacuum cord while her mother watched.

She said the siblings were forced sometimes to eat plain peanut butter sandwiches or peanut butter on a corn tortilla. "Kareem would time us for two minutes or five to eat the tortilla or sandwich and if we didn't get it on time because it's nasty we would get sriracha or Tapatio on it," she said.

She said Leiva put an alarm on the boys' bedroom door because one time her younger brother sneaked out in the middle of the night to look for food. "They said that since we are in trouble we can't have real food. They say that that's a privilege," the girl said.

As to what happened to Anthony, his sister said, "A lot of times he got hurt and one morning he woke up and my -- he was acting a little weird so my mom said that they were gonna go to the hospital, and Anthony said he wanted to sleep so my mom let him sleep for a little and when he woke up my mom said he wasn't breathing."

"The night before my mom was -- told Anthony that they were gonna go to the hospital, Kareem picked him up from his armpits and dropped him on the floor," the girl recalled. "He did that about 10 times." When Anthony wasn't waking up the next morning, the girl said her mother threw cold water on him. She then said her mother carried Anthony downstairs and he looked "frozen." Barron then called 911.

If the boys had an accident because they were locked in their rooms and could not go to the bathroom, the girl said they boys would have to sleep on the floor. "Kareem would hold their legs, make them lay down, and put their face in the pee."

When police or social workers came to the house, the girl said she lied to them because her mother told her not to talk about Leiva. She said her mom got mad because Anthony would cry a lot when he was in trouble. She said Anthony and her other brother would get punished pretty much every day.

The girl said Leiva would also slap her mom, and that only she, Anthony and her other brother were disciplined all the time, and not the other children.

At the end of the prosecutor's questions, several grand jurors asked their questions as well. The girl was then excused and asked to keep everything that happened inside a secret.

The grand jury is composed of 25 members of the community who are tasked to hear the evidence and arguments presented by the prosecutor and decide whether an indictment is warranted or not.