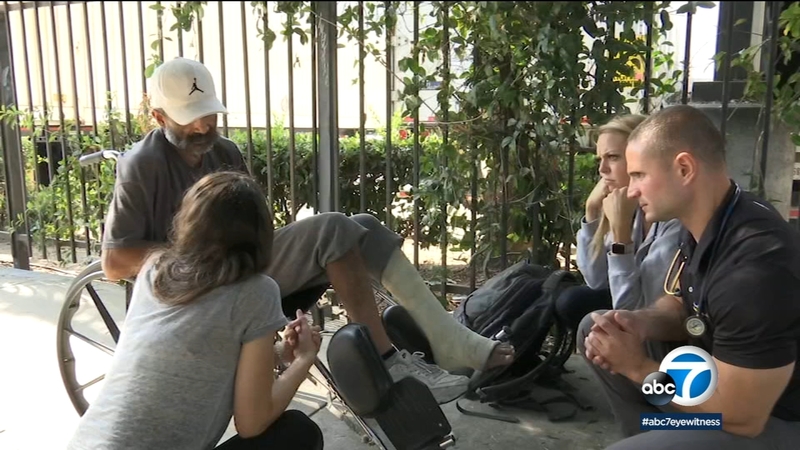 LOS ANGELES (KABC) -- Researchers at USC are using a dedicated team to take primary care to the streets in a unique approach to help solve the homelessness crisis.

Tracking down 45-year-old Eddie Wynn wasn't easy. Studies show a homeless person living on the streets of Los Angeles will be forced to relocate about five times a month. But the Street Medicine Team from Keck School of Medicine at USC found him under an overpass.

How he survived on the L.A. streets for eight years with a pacemaker and asthma is a wonder for scientists. Dependent on the medications, Wynn's survival has been a struggle. The medical team recently checked his prescriptions.

"It's more better for me because they can come and give it to me instead of going to the hospital," Wynn said.

Wynn is one of the 45,000 unsheltered people sleeping on the sidewalks in L.A. County.

USC recruited Feldman from a successful street medicine program in Pennsylvania. But, L.A. is proving to be a unique challenge.

"There isn't a typical homeless person in L.A.," he said. "The systems that we have in place right now don't serve everybody and there is a group of people, namely the homeless, that can't access healthcare in traditional settings."

So the team is taking primary care to non-traditional settings.

Feldman's team is made up of nurse practitioners Gabrielle Johnson and Lauren Espinoza, as well as a special member of the practice, Joseph Becerra.

"Joseph, he's our community health worker. That's his official job title, but he's really our street guide. So his job is to know where everybody is at all times," Feldman said.

The team works with homeless patients inside the hospital. They consult on cases and educate doctors about the obstacles a homeless person may face after discharge.

A majority of his patients have a physical or cognitive disability, often stemming from adverse childhood events or head injuries.

"It changes the script. It's not that they won't do this or won't to do that. It's that they actually can't," Feldman said. "The cognitive assessments that we do are in line with a moderate level of Alzheimer's disease."

Steven Douglas Jones, 68, does well on his test - but the team's visit also does something that can't be measured on a test.

"They've been helping because what they do is they show that you are somebody," Douglas said.

Many people living on the streets may feel discarded and forgotten. They're not just hungry for food and shelter, Feldman argues.

"Probably our greatest gift is our willingness to share in their suffering and do so with great joy," he said. "How that looks like in real life is, let's say we ride the bus with them and we sit with them as friends in solidarity."

The team started seeing patients in December 2018 and is now up to seeing 175 patients and picking up 15 to 20 more each month. In that short time, more than half of the first hundred patients have found housing.

"Which is a crazy number because we don't do housing," he said.

Feldman chalks that up to collaboration and follow through. However, success doesn't always mean finding housing.