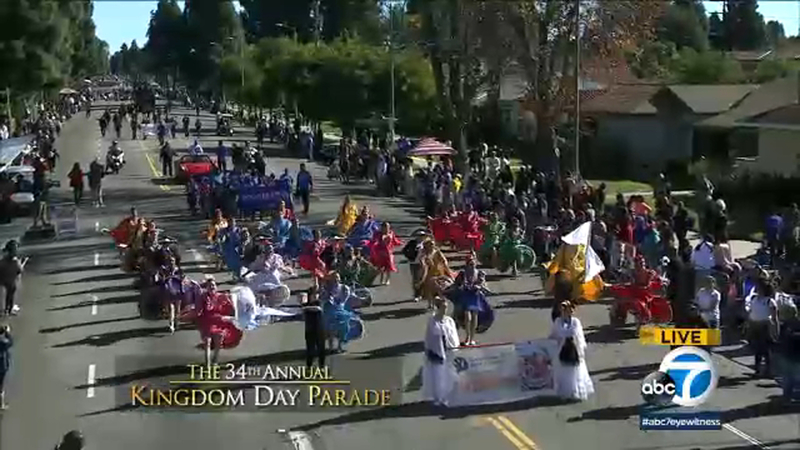 The parade marched through the streets of Leimert Park, featuring some of the area's best bands, ethnic dance groups, politicians and local leaders.

It is the largest Martin Luther King Day parade and celebration in the country. This year's theme was "Healthy Bodies, Healthy Minds, Healthy Democracy" and commemorated Dr. King's 90th birthday.

"Look at the people who are out here," said Rep. Maxine Waters. "They know he was one of the most important persons in the universe and that he left a legacy that we must understand and we must follow."

Among the many familiar faces at the parade was L.A. Dodgers manager Dave Roberts, who was this year's grand marshal. He said he felt humbled to see multiple generations at the parade, which holds sentimental value to him and his family.

Dodgers manager Dave Roberts shares why he's grateful to be the grand marshal for the 2019 Kingdom Day Parade.

"I think about my father, who passed a couple of years ago, and who instilled the values of civil rights and what Dr. King meant to our country," he said. "So for me to be able to kind of pay it forward a little bit and fulfill his legacy just a little bit more and move it forward, I'm deeply humbled. To see the energy, the passion and so many people excited about the Kingdom Day Parade is pretty awesome."
When asked about a three-peat for the Dodgers this year, he said "we're going to bring home a championship."

"It's a great day for Los Angeles to celebrate the legacy of a great man. He's a person who changed the course of American history and still influences today, and it's right that we're out here," Moore said.

Members of the United Teachers Los Angeles union, which is in the middle of a days-long strike and contract negotiations with the L.A. Unified School District, marched in solidarity in the parade. The LAUSD All City Honor Marching Band and bands from other local high schools performed, but some schools missed the event due to the teachers strike.

"It's a great day celebrating a great man, great country, and I think we're showing there is still a lot of work that needs to be done. It's our generation, so it's our time to fight this fight for human rights and civil rights," said L.A. City Councilmember Herb Wesson.

The celebration continued after the parade at the Leimert Park Kingdom Day Freedomfest, which runs until 5 p.m. The event features booths, food and music.
For more information visit: www.kingdomdayparade.org