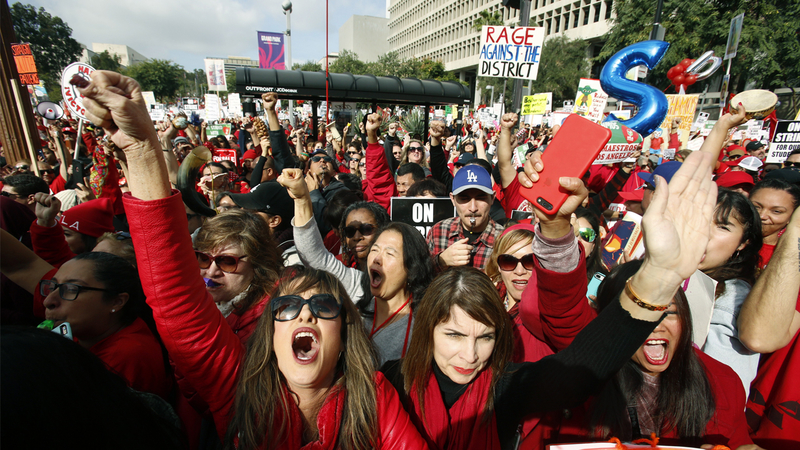 LOS ANGELES (KABC) -- The United Teachers Los Angeles union announced that teachers should report to the picket lines Tuesday as planned, even if a tentative agreement with the L.A. Unified School District is reached Monday night.

UTLA released the call to action in a tweet saying, "We are making progress but whether or not we reach an agreement late tonight, everyone should report to picket lines as usual Tuesday morning. We will need to ratify the TA before we end the strike."

The announcement comes after a weekend of negotiations and during a new round of bargaining talks that began at 9:15 a.m. Monday and remain ongoing at City Hall, according to the office of L.A. Mayor Eric Garcetti.

Garcetti has been mediating the negotiations and on Monday sent out a statement saying, both parties have made "tremendous progress" in the last few days and he is "optimistic that we have the momentum to take those final steps toward bringing our teachers and young people back into their classrooms."

"We are prepared. We're hoping that all of our student will come to school tomorrow. We have a plan in place for them to continue education, and we hope that the people at the table can get the work done so we can all get back to business and teaching our students," said George Washington Carver Middle School Principal Latasha Buck.

Members of UTLA marched in solidarity in the 34th Annual Kingdom Day Parade, which also took place in Los Angeles Monday. Some LAUSD schools were not able to participate in the event due to the teachers strike.

The strike is affecting nearly 600,000 students. By the end of the strike's fifth day on Friday, the district said it lost about $125 million in state revenue payments that are based on student attendance.

"If we allow this movement to win, then our schools will be privatized, our students will have less equity and less access, and our jobs and our healthcare will be attacked," said UTLA President Alex Caputo-Pearl at Friday's rally.

"What we need to do is work with the union to get more resources, you know, it's a funding issue: the lower class sizes, we want to hire new teachers. Our offer right now is to bring in 1,300 more employees to lower class size, bring nurses and counselors. To do more, we need commitment from the union to work collectively toward getting more money from Sacramento," said Nick Melvoin, of the LAUSD.
Report a correction or typo
Related topics:
educationlos angeleslos angeles countylausdunion contractstrikeunionsteachersstudents
Copyright © 2021 KABC-TV. All Rights Reserved.
More Videos
From CNN Newsource affiliates
TOP STORIES