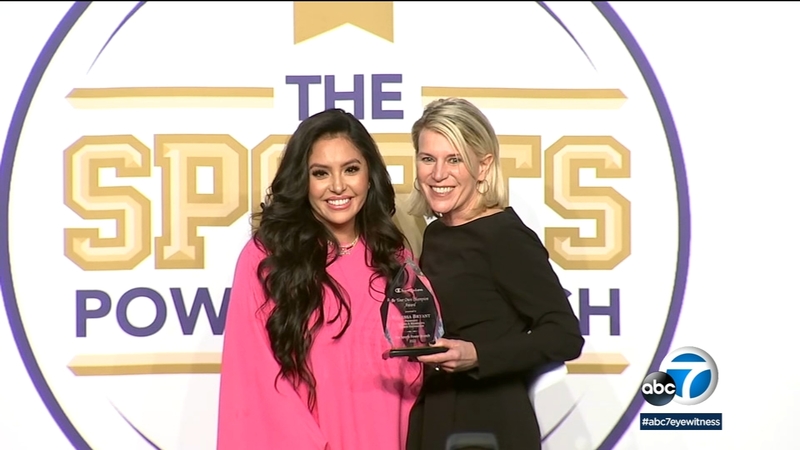 Kobe Bryant's estate has reached a new long-term contract with Nike to continue producing both footwear and apparel from Bryant's Zoom Kobe series, Vanessa Bryant and Nike announced on Thursday.

"We're excited to announce our partnership with Nike is going to continue!" Vanessa Bryant wrote in an Instagram post. "I am so proud that my husband's shoes are still the most worn by players on NBA courts and that the demand for his shoes remain so desired by his fans around the world."

Nearly 20% of NBA players have worn a Nike Kobe sneaker for a game since Bryant, along with his daughter, Gianna, and seven others died in a January 2020 helicopter crash. During the 2019-20 season, 102 of the 322 total players competing in the league's restart at the Walt Disney World Resort wore a Kobe sneaker.

Vanessa Bryant posted images of the Hall of Fame exhibit that will honor the life and legacy of her late husband Kobe Bryant.

"Kobe Bryant means so much to so many of us, not just NBA fans but globally beyond the game," John Donahoe, Nike's president and CEO, said in a statement. "His impact in growing the sport, particularly encouraging women and young people to pick it up, endures as one of his deepest, lasting legacies. Together with Vanessa, we hope to honor Kobe and Gigi by championing a new generation for many years to come."

In addition to re-releases of the 11 signature Kobe models worn by Bryant during his career, and potentially his six post-career models as well, Nike also will be launching a new Gigi Bryant shoe series, with a charity component.

"With this new partnership, fans will soon be able to have access to Kobe and Gigi Nike product for years to come," Vanessa Bryant said. "Nike [is] donating 100% of the net proceeds yearly for Gianna's shoes to our Mamba and Mambacita Sports Foundation (M&MSF)."

According to Nike, the first release from the renewed partnership could arrive as soon as May 1, which would have been Gianna Bryant's 16th birthday. Styled in "Gigi's" black and white "Mamba Ballers" team uniform colors, with gold accents, that shoe was originally produced just before last April's contract expiration, and never officially released.

The 1st shoe to release in the new Kobe & Nike partnership will honor his daughter Gianna, who would have turned 16 on May 1, 2022

“The Kobe 6 Protro ‘Mambacita Sweet 16’ will honor Gigi Bryant. All proceeds from the shoe will benefit the Mamba and Mambacita Sports Foundation.” pic.twitter.com/pgT4Ab4s5g

"The first new shoe from the partnership, the Kobe 6 Protro 'Mambacita Sweet 16' will honor Gigi Bryant," Nike said in a statement. "All proceeds from the shoe will benefit the Mamba and Mambacita Sports Foundation."

During stalled talks leading up to the eventual expiration of the deal last year, the Kobe Bryant estate had pushed for Nike to produce a higher volume of shoes for the re-release launches as well as the expansion of Kobe's shoes to include kids' sizes. But another key element in renewing the partnership with Nike was its commitment to launching a new basketball facility in Bryant's name.

"I am also grateful that Nike and I will work together to establish a youth basketball center in Southern California that will share the Mamba Mentality with youth athletes for generations to come," Vanessa Bryant wrote.

While the production process and timeline for new sneaker designs can typically take anywhere from 14 to 18 months, several of Nike's Kobe sneakers can be accessed for factory production sooner than that, sources told ESPN, now that a new contract with the Kobe Bryant estate is in place.

"I know this is an inspiring moment for my husband and daughter's global fans," Vanessa Bryant said. "And I am very appreciative of each and every one of you!"