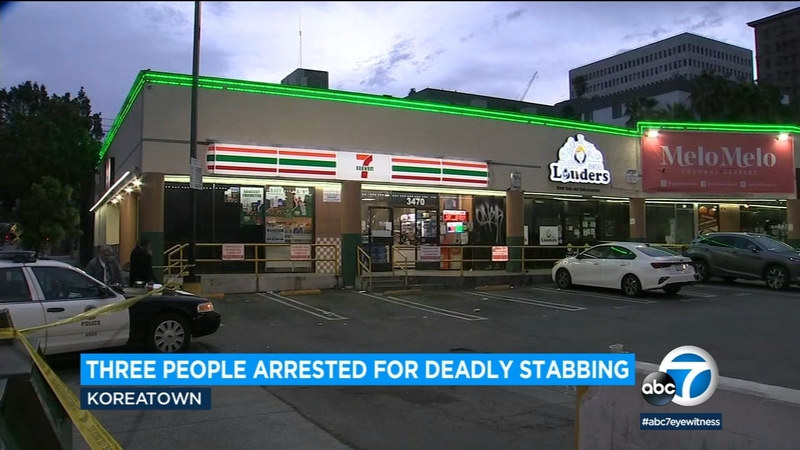 LOS ANGELES (CNS) -- Three men were in custody Monday in connection with a fight near a 7-Eleven in Koreatown that left one man dead and another man hospitalized.

Officers were dispatched at about 2 a.m. Saturday to Sixth Street and Alexandria Avenue on a report of a group fight, according to the Los Angeles Police Department.

"Officers arrived and found the victim stabbed," police said in a statement "A dispute occurred, resulting in a fight. The victim tried to break up a fight when an unidentified male ... stabbed the victim. After the stabbing, two additional suspects hit and kicked the victim's companion causing injury."

Both men were taken to a hospital, where one died and the other was treated for injuries described as not life-threatening, police said. The fatally wounded man's name was withheld, pending notification of his relatives.

A man was stabbed to death while trying to break up a fight Saturday morning near a 7-Eleven in Koreatown.

"Investigators identified a suspect vehicle and tracked the vehicle to an address in Echo Park," police said.

On Saturday, police arrested the two men believed responsible for beating the man who survived, police said. Josue Alegria and Damian Dehorney, both 26, were booked on suspicion of attempted murder, and they were being held on $1 million bail each.

On Sunday, the man suspected of fatally stabbing the man surrendered to homicide detectives, police said. Jose Garibay, 26, was booked on suspicion of murder, and he was being held on $2 million bail.