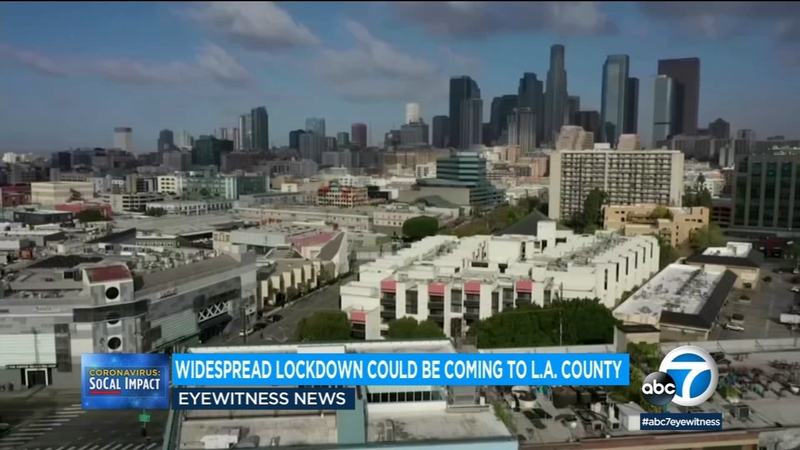 LOS ANGELES (KABC) -- A coalition of Los Angeles-area unions are calling for a sweeping monthlong countywide lockdown for January 2021 to bring the surge of COVID-19 cases and deaths under control.

In light of such numbers, the coalition of more than a dozen healthcare, labor and community groups sent a letter to the county Board of Supervisors on Wednesday asking for the implementation of a "circuit breaker,'' a strict four-week lockdown that would include curfews and the forced closure of all nonessential businesses.

Mayor Eric Garcetti said hospital officials are telling him and his staff that if Los Angeles continues on its upward trend of COVID-19 hospitalizations through Christmas, the medical facilities will "go under."

"Health care workers throughout Los Angeles are reaching their breaking point. They are understaffed, overworked and inundated with patients fighting for their lives,'' Sal Rosselli, president of the National Union of Healthcare Workers, said in a statement. "COVID-19 cannot be allowed to spread following the December holidays the way it spread after Thanksgiving. We all have to work together to keep this from getting worse, and that starts with people having the financial security to stay home.''

In their letter, the group called for the lockdown to include "safety nets'' for businesses and workers affected by the closures, including suspension of mortgage/rent payments, free meals, direct payments to workers to subsidize lost wages and worker-retention policies for people laid off during the crisis.

"We urge you to immediately call for state and federal funds to allow L.A. county to have a true lockdown, one that prioritizes the lives of everyone -- particularly essential workers and working families -- over comfort and convenience,'' according to the group's letter.

Proponents of the plan, and some county supervisors, say it would only work if workers and businesses are paid to offset the economic losses.

RELATED:2 people on average dying of COVID every hour in LA County with hospitals 'under siege' amid surge
EMBED More News Videos

Los Angeles County health officials are feeling the pressure Thursday in the wake of Wednesday's record-breaking numbers of virus deaths, cases and hospitalizations that have the emergency medical system "under siege.''

"What we're doing is just not working," said Kurt Peterson of Unite Here Local11. "So we need to follow the science, we need to look at places where they've been more successful. In doing so, those places are places that have locked down for a certain period of time in order to get the virus under control."

The coalition argued that essential workers, low-income and ethnic communities are disproportionately being impacted by the pandemic. Organizers said a true lockdown is the only way to get a handle on the rapid spread of the virus.

"We have reached a crossroads where only decisive measures can prevent our hospitals from becoming overwhelmed,'' said Ninez Ponce, a professor at the UCLA Fielding School of Public Health. "A time-limited circuit breaker' can reverse the tide of the epidemic, bring the number of cases down by breaking the chain of infection, and reduce pressure on our health care system.'

A coalition of labor unions is calling for a broader shutdown in Los Angeles County amid a worsening coronavirus pandemic.

According to the Department of Public Health, 20% of the 4,864 people hospitalized with COVID-19 countywide were in the ICU.

Meanwhile, the rollout of Pfizer's COVID-19 vaccine continued after it was received by nine pre-designated sites across the county. The initial allocation was being used to vaccinate frontline health care workers ahead of an expected second shipment of Pfizer's vaccine next week.

In a statement, the health department expressed hope that a second vaccine, manufactured by Moderna, soon will receive emergency use authorization by the Centers for Disease Control and Prevention.

Thursday's new data was released hours after California officials announced that the Southern California region's ICU capacity had dropped to 0%.

The ICU capacity in the 11-county Southern California region has dropped to 0% amid a dramatic surge in coronavirus cases, officials said.

California also reported a staggering 52,000 new cases in a single day - equal to what the entire U.S. was averaging in mid-October - and a one-day record of 379 deaths. More than 16,000 people are in the hospital with the coronavirus across the state, more than triple the number a month ago.

Hospitals across California have all but run out of intensive care beds for COVID-19 patients, ambulances are backing up outside emergency rooms, and tents for triaging the sick are going up as the nation's most populous state emerges as the latest epicenter of the U.S. outbreak.
For a better experience, click here to view the full map in a new window

CALCULATOR: Find out how many people may get a COVID-19 vaccine before you