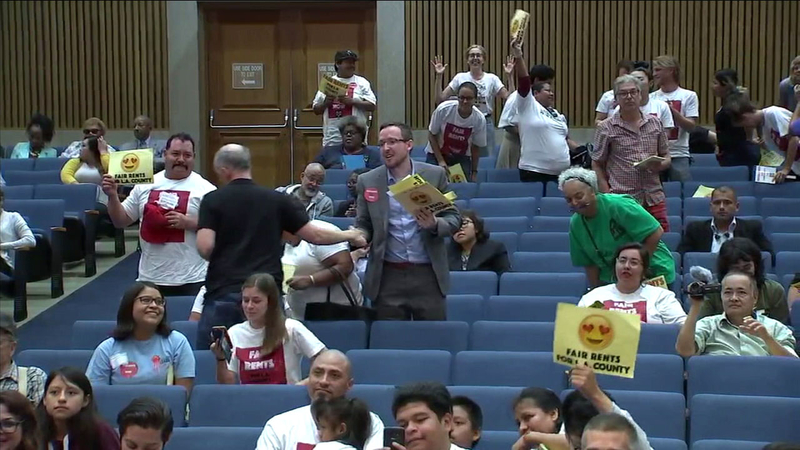 LOS ANGELES (KABC) -- The Los Angeles County Board of Supervisors voted 4-1 on Tuesday in favor of an ordinance to temporarily limit rent increases in unincorporated areas of the county.

Tenants' rights advocates rallied outside the Hall of Administration in downtown Los Angeles prior to the supervisors meeting on Tuesday. They were fired up, hoping the board would approve the temporary rent freeze ordinance.

Board Chair Sheila Kuehl and Supervisor Hilda Solis came up with the idea to control rent increases in unincorporated L.A. County at 3 percent annually. Controlling rent increases, they said, is a way to prevent homelessness in the county.

"The more we see elderly people on the street and homeless, the more ashamed we should be that we haven't taken action to help them," Kuehl said.

For nearly two hours, the supervisors heard from nearly 100 people mostly urging them to approve the rent freeze ordinance.

Landlords who spoke out against the rent control ordinance said for the mom-and-pop rental property owners, this will force them to sell their properties.

"It doesn't address building. In fact, it disincentivizes investors to create new housing. Interest rates are going to be going up to 6 1/2 percent in the next couple of years, which is going to knock a lot more people out of the market," said landlord Amanda Freeman.

With a 4-1 vote, the temporary rent freeze ordinance was approved.