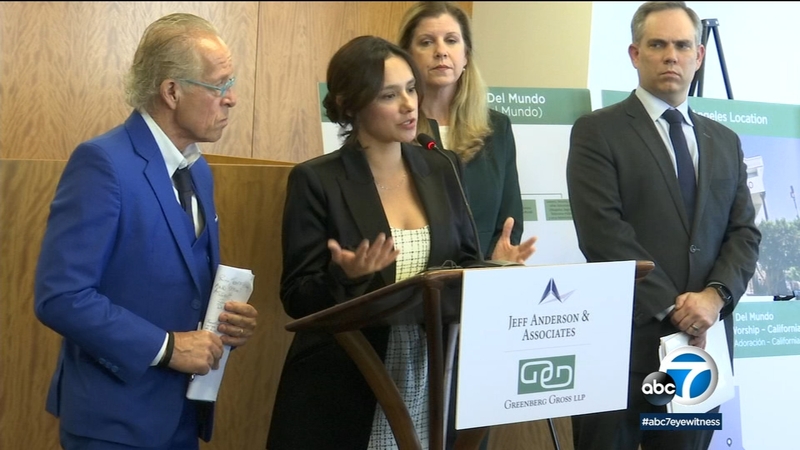 LOS ANGELES (KABC) -- A Southern California woman said Thursday in a federal lawsuit that the father and son leaders of a Mexican megachurch sexually abused her for over two decades.

At the age of 33, Sochil Martin is coming forward with allegations of a childhood tainted by sexual abuse in the international church.

Martin alleges La Luz del Mundo officials manipulated Bible passages to convince her that the mistreatment by self-proclaimed apostles actually was a gift from God.

"From the age of nine, I was taught by my own family and community that my eternal soul depended on me sexually pleasing La Luz del Mundo apostles," she said.

Martin filed a lawsuit against the church, its leadership and the man at the helm: Naasón Joaquín García, known as "The Apostle."

Martin said she was first forced to serve García as well as his father and predecessor, Samuel Joaquín Flores.

García has been in jail since June, facing charges that include child rape and human trafficking.

"For nearly 22 years, I was made to work for, travel for, lie for, and give my body to an organization that saw me as nothing more than a source of profit and sexual pleasure," Martin said.

She and her husband left the church in 2016.

"Towards the last year, I just saw and lived so many things that I really don't wanna talk about right now. And I fell into depression so many times because of everything that I saw him do," Martin said.

Lawyers for Martin said there could be more victims in Southern California and internationally.

"The lawsuit filed yesterday, is the first step in dismantling a complex corrupt and powerful institution," attorney Deborah Mallgrave said.

The church's headquarters is in Guadalajara, Mexico, and one church is in East Los Angeles.

"Hundreds, if not thousands of other children before me and after me, suffered the same fate. I come forward today because this has to stop," Martin said.

La Luz del Mundo Church has condemned past allegations, insisting they are fabricated and bear no evidence. The church has continued to defend García.