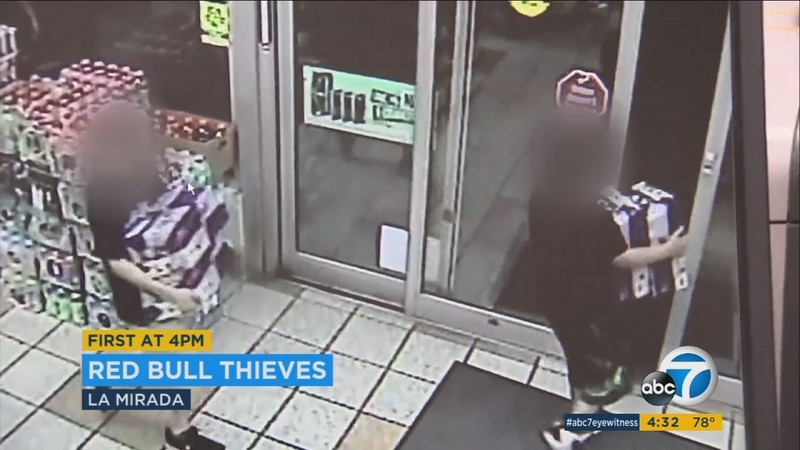 LA MIRADA, Calif. (KABC) -- A couple targeted a La Mirada ampm and used kids to help them steal Red Bull, which also led to the children pelting two clerks with the cans.

Security video captured a man who stayed outside the store and pointed at merchandise through the window. He instructed the children on what to take.

At the same time, a woman who the clerk presumed was the children's mother came to the counter and distracted the clerk by asking about the price of cigarettes.

"'How much is a cigarette? You know how much this one and this one is?' Take a lot of time," store operator Ashraf Guirgis said.

One of the children made their move a moment later, grabbing as many cases of Red Bull as they could carry and making a run for it.

Guirgis said he was floored by what he saw on the video. The children were acting as operatives. A case was spilled and then the male thief hurled a 12 oz projectile at another clerk, who tried to get a picture of them with his phone.

"They only take the Red Bull because the case is small, a little bit. It's not heavy and it's expensive. The cost is around $50. Total damage is like $700," Guirgis said.

The cost does not include the loss of a clerk, who was scared off by the bullies. The person quit because they did not want to work at night, Guirgis said.