"I have been through too much to not become successful," said the 24-year-old Crenshaw native.
KABC
By Rachel Brown 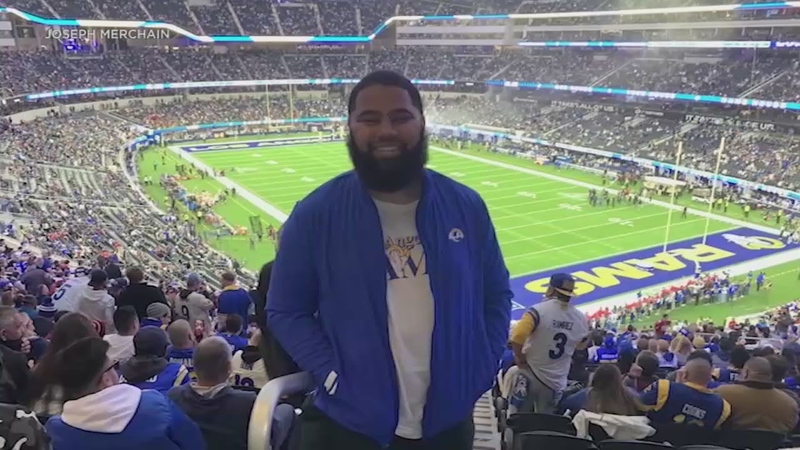 How an LA Rams internship helped this student tackle homelessness

LOS ANGELES (KABC) -- The Los Angeles Rams do a great job building support for their players as they move forward in the playoffs.

The team also has done a lot to support Joseph Merchain, a college student battling homelessness who recently completed an internship with the Rams.

"That Rams game playoff was my first ever playoff. It was amazing because the energy of a playoff game compared to a regular season game was out this world. Out this galaxy. I was screaming so loud at the top of my lungs!" said Merchain.

For the 24-year-old Crenshaw native, the Rams organization has been life changing.

The fall internship has helped him tackle homelessness, food insecurity, and has assisted him in gaining real workplace experience.

Just like in football, Merchain has taken many hits in life. Now, he's studying political science at Pasadena City College.

"My career aspiration is to eventually run for president of the United States of America. Anticipated year 2036," said Merchain.

What you wouldn't know is that Merchain is by all accounts homeless, living in a room through Project Roomkey. He's lived in 32 foster homes and three group homes throughout his life.

Merchain said when he was 13, he ran away after suffering sexual abuse at the hands of a foster caretaker.

"I had to fend for myself so I ended up living in Skid Row for about a month and half," he said.

He's never meet either of his parents and has never known the comfort of coming home to a safe, permanent house. But through it all, he's thriving.

"Just the driving force, I believe, it's my dedication and my yearning for success," said Merchain.

With the support of the nonprofit Brotherhood Crusade, Bank of America and the Rams, Merchain completed the 100-day internship in the Rams community affairs department. One he calls a life-changing opportunity and an experience he is most grateful for.

"I have been through too much to not become successful," said Merchain.

Plus, the fact that the Rams are going to the playoffs is just a cherry on top of a very big year for this inspiring young man.