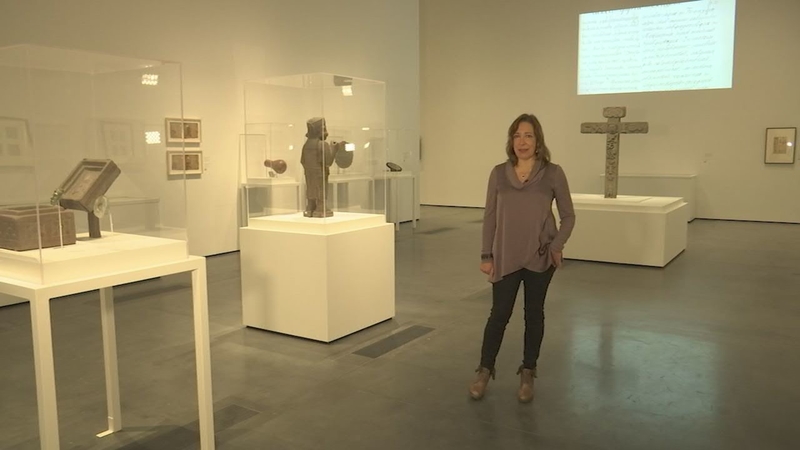 LOS ANGELES (KABC) -- The Los Angeles County Museum of Art is marking the 500th anniversary of the fall of the Aztec capital Tenochtitlan with an exhibition that aims to subvert the traditional narrative of Spanish conquest over Mexico.

"If we say conquest, there's always a conqueror and conquered," said Diana Magaloni, deputy director of the Program for the Art of the Ancient Americas and head of the Conservation Center at LACMA.

Instead, the word mixpantli in Nahuatl, the language of the Aztecs, means "banner of clouds." It was considered an omen of the battle that was to come.

"This is a banner that descended from Heavens, it is an event of cosmic consequences," said Magaloni. "It's something that you need to understand. Understand your place in the New World that that event creates, but it is not about the domination of peoples over another."

The exhibit "Mixpantli -- Space, Time, and the Indigenous Origins of Mexico" features relics, maps and manuscripts. Some pieces show the forging of Nahua and Christian worldviews. Others illustrate the reverence of indigenous people for the land they were defending.

Visitors can also see the Florentine Codex projected on a wall. It is a 12-volume encyclopedia made by the indigenous peoples who lived in central Mexico around 1575, according to Magaloni. She added that at the time, a pandemic killed about 90% of the indigenous population of central Mexico.

The exhibit also holds the Moctezuma Codex, a document that depicts the Mexica emperor's imprisonment and murder by Spaniards, not by his own people.

"It's an important document because it's one of the only documents where you see that actually, Moctezuma was imprisoned right here with a cord on his neck by a Spaniard and then killed with a sword," said Magaloni.

The exhibition experience comes alive through text and audio in English, Spanish, Nahuatl, and Zapotec, an indigenous language spoken in Mexico and by many of the Diaspora living in Los Angeles today.

"This is the first time that I see my Zapoteco written in the wall, that I hear the voice in Zapoteco, and the narration of the exhibit in Zapoteco," Odilia Romero, co-founder of CIELO, said.

"We have a map in the floor of the first indigenous map of Mexico City made by Mariana Castillo Deball. Then we have the maps made by Sandy Rodriguez, that take that very colonial cartography into the present," Magalon said. "There's another point of view. There's this story in this of very resilient, resistant and creative peoples, that they are not dominated that they always created their world."

Mixplantli runs at LACMA through May 1.