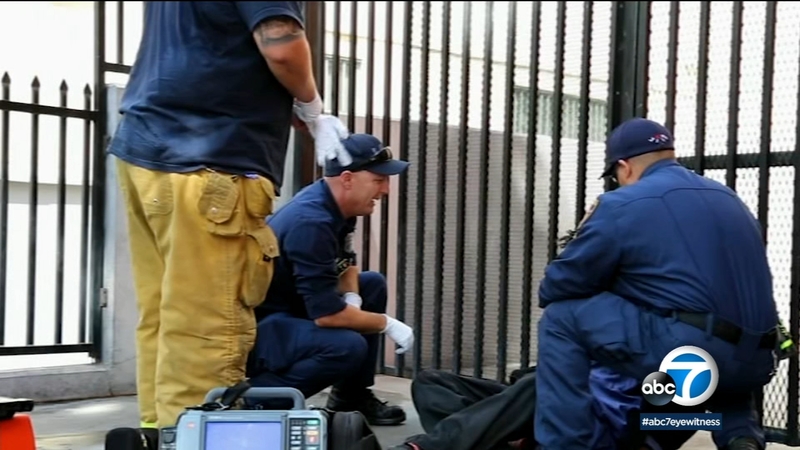 LOS ANGELES (KABC) -- Los Angeles Fire Department Station 9 in Skid Row is one of the busiest in the nation.

It serves the smallest response area in the city, but has the highest call load. The station sees 80 to 100 runs a day and the vast majority of the patients are homeless.

One homeless man, Maurice Russell, said the only way he and his friends can get help is to call 911.

The growing crisis on the streets of downtown L.A. and across the city is creating serious challenges not only for the homeless, but for the first responders responsible for the health and safety of the city's most vulnerable.

An Eyewitness News analysis of data obtained from LAFD shows that 43% of all fire incidents citywide that resulted in a report involved a homeless person. That's 3,267 incidents last year alone.

Also, 14% of LAFD's ambulance transports citywide in 2019 were for the homeless.

But homeless people account for less than 1% of the city's population.

"No one can ignore it," said Dr. Marc Eckstein, the medical director and commander of the EMS bureau for the Los Angeles Fire Department. "The problem is in almost every neighborhood."

But one area stands out among others: Station 9 on Skid Row.

The station is ground zero for these incidents, and it's not without risk.

"The men and women at Fire Station 9, it's remarkable. I mean God bless them," said Eckstein. "They're exposed to infectious diseases that you think you would only see in a Third World country. Patients with needles in their pockets, needles in their arms, covered in human waste and bugs."

Both lives and property are at risk in these situations. The 2017 Skirball Fire raced through Bel Air destroying six homes, and damaging another dozen. It was sparked by an illegal cooking fire at a homeless encampment.

Another fire sparked in a homeless encampment burned in the Sepulveda Basin last summer.

"You have warming fires, cooking fires and drug use. That is unfortunately a set-up for disaster," said Eckstein.

A new city ordinance allows police to clear homeless encampments when the risk of fire is extreme.

There are an estimated 36,000 homeless people living all over Los Angeles.

"It's a horrific situation when you have people living in squalor, living in tents, and you throw in mental health illness and substance abuse, it's often a deadly combination, it's definitely taxing on resources," Eckstein said.

One way the LAFD is trying to distribute those resources is in the form of a dedicated "sober unit."

It's part of a strategy to tackle some calls without a trip to the emergency room. In 2019, 80% of EMS incidents involving the homeless ended up with an ambulance transport to the E.R.

"When these folks go to the ER, we're not helping them, we're overcrowding the E.R., we're tying up paramedics. That's just a system failure," said Eckstein.

Out on the streets, the need is overwhelming.

"There's a lot of homelessness and brokenness out here," said Isabelle McEwen, a homeless woman. "But I see a lot of hope."