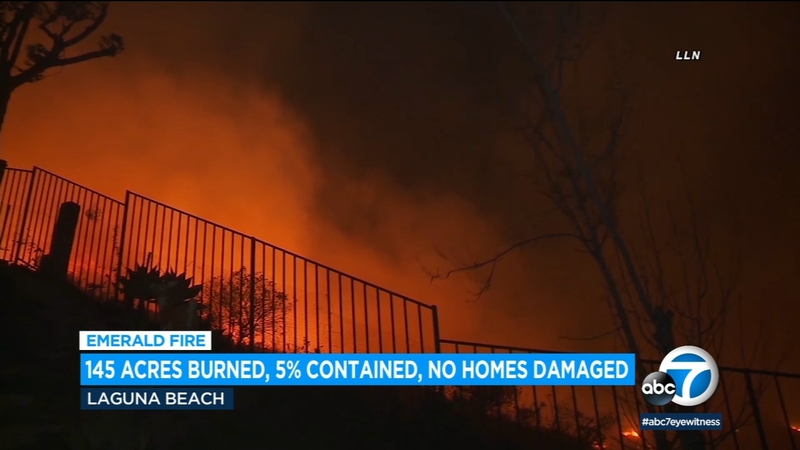 Emerald Fire in OC grows to 150 acres; no homes damaged

The fire, dubbed the Emerald Fire, broke out around 4 a.m. in the Emerald Bay area east of the Pacific Coast Highway, which had been completely shut down. The blaze has burned 145 acres and is roughly 20% contained, according to the Orange County Fire Authority.

"Crews are working through the night to increase containment and structural defense. Tactical patrols will continue in the effected neighborhoods," OCFA tweeted just before 6 p.m.

The Laguna Beach Police Department issued a mandatory evacuation order for all residents in Irvine Cove and North and South Emerald Bay as the flames inched dangerously close to homes. Evacuation warnings were issued for all of North Laguna, affecting residents north of Broadway. The city of Irvine established an evacuation center for those affected at Los Olivos Community Center at 101 Alfonso.

Officials lifted evacuation orders for Irvine Cove and Emerald Bay at 3 p.m., but the areas were still under an evacuation warning and residents should remain on heightened alert.

A bright orange glow could be seen from miles out in the early morning hours, indicating the flames burned a large area. But during a Thursday morning press briefing, OCFA Chief Brian Fennessy said the spread had slowed.

Although no homes have been damaged, Fennessy stressed the importance of preparation given the unusual winds, low humidity and hot temperatures in February.

The last time that area burned was back in 1993, which triggered memories for many residents.

Steve Chandler chose not to evacuate his home Thursday morning as the Emerald Fire burned in Laguna Beach - the same area that burned back in 1993.

Although he was in the evacuation zone, Steve Chandler chose not to evacuate Thursday morning because of a natural fire break, as he called it, left by that devastating fire.

Hundreds of homes burned back then. This time around, Chandler said he's grateful for a different scenario.

"This time, they were on it. They were good. And the only thing that really is different than the '93 is the winds just went all day, all day, into the night," he said.

The winds that fueled the flames started to taper off into the morning, but there were concerns that they might pick up again and move the flames toward Newport Beach.

Residents in Newport Coast will be able to leave and return to their homes. Officers located at Pacific Coast Highway and Newport Coast Drive will be facilitating access to the communities.

Additional details about the cause of the fire were not immediately available.